The road between Clonmany and Buncrana in Co Donegal, where eight men were killed in a crash on Sunday night, has reopened.

The families of seven of the eight men visited the scene privately before it was reopened to the public at 10pm.

Some of them left flowers in memory of their loved ones.

Funerals for the eight men will take place over the next three days.

Seven men in a black Volkswagen Passat, along with the driver of a second car, a red Toyota Corolla, were killed in the crash at around 10.40pm on Sunday.

The man driving the Toyota Corolla has been named as 66-year-old Hugh Friel.

Mr Friel was returning home to Clonmany after an evening at bingo in Buncrana.

The driver of the Passat, Shaun Kelly, was taken to Letterkenny General Hospital with serious injuries following the collision.

He was said to be 'ill but stable' in hospital this morning.

It is believed that the Passat clipped a Renault Megane on the road to Buncrana before crashing head-on into the Corolla 150m away.

Last night, the remains of seven of the victims were released to their families.

In Clonmany, where seven of the victims spent their last night enjoying the World Cup Final, people came out onto the streets to pay their respects as the hearses passed through the village.

Drop-in facilities are being set up in Buncrana and Clonmany, which organisers say will allow people to come and talk after going to the wakes of the deceased.

Fire service crews, paramedics and gardaí are said to be in shock after seeing the scale of death and devastation on the road.

Assistant Commissioner Kieran Kenny said it was the worst road accident he has dealt with in his 34 years in the force.

'This is a very, very sad and tragic and stressful time and we will do what we can to get those people through the next few days,' he said.

The accident happened on the R238, ten stretches of this route are classed as collision-prone zones on official garda files.

Locals described the road as notorious, with severe S-bends but gardaí said the accident happened on a short, straight stretch between two bends.

The road was dry at the time and the surface was described as good.

Gardaí are appealing for anyone who was in the area, or who was travelling on the Buncrana to Clonmany road, between 10pm and 11pm on Sunday night, to contact Buncrana Garda Station on 074-9320540. 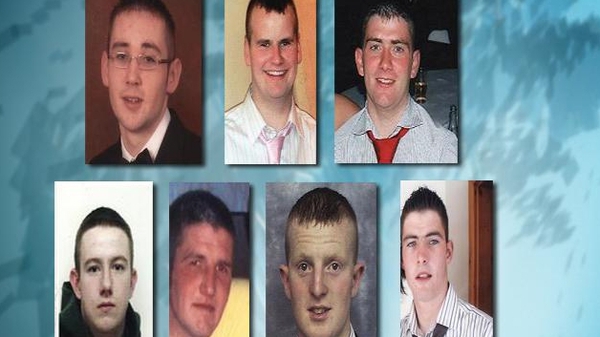