Mr Noonan, a former leader of the party, becomes Finance Spokesperson in place of Mr Bruton, who has been appointed to Enterprise, Jobs & Economic Planning.

Mr Bruton challenged Mr Kenny for the party leadership last month, but had been expected to remain in the frontbench.

Mr Kenny said that he has only requested of new frontbench members that they understand the team is dedicated to taking Fianna Fáil out of Government.

He said the electorate needs to know Fine Gael has a clear strategy and a clear plan.

He said he was happy each member of the frontbench accepted their responsibility.

In a statement, he said: 'Fine Gael is united and focused on the major challenge facing the party and the country.

'That challenge is to replace this disastrous Government with a better alternative that will get our people back to work and our country back on track.

'The team I have picked today provides a mixture of both experience and youth and will lead our party into Government after the next election.'

Several of those who withdrew their confidence in Mr Kenny have been included in the reshuffled frontbench.

Simon Coveney and Leo Varadkar have been given the Transport and Communications & Natural Resources roles respectively.

Noonan to build on Bruton's work

Michael Noonan (left) said he would be building on the work of his predecessor, whom he said had done extremely good work.

Mr Noonan said he wanted to provide some leadership in the role as Finance Spokesman.

Michael Noonan, said he will be changing some of his party's policies, stating a preference for expenditure cuts over tax increases.

He said the Government's biggest mistake in tackling the recession was to treat it as a consequence of the banking crisis.

Deputy Noonan said the unemployment situation was a crisis in its own right.

He said Anglo-Irish was a dysfunctional bank with no purpose but that decisions had now been taken and it was 'hard to unscramble an egg.'

Referring to the two main banks, AIB and Bank of Ireland, he said that they were still not functioning properly.

Mr Kenny said that the position given to Mr Bruton includes work on public sector reform, which will be a frontbench position if Fine Gael is in power.

In turn, Mr Bruton said he was fully confident in his party leader and is excited by the role he has been asked to play.

Richard Bruton added that he was disappointed for people who have been left out.

He said personally it was difficult that people who 'put their neck on the line' for him had suffered as a consequence.

Mr Kenny added that there is no long grass in which TDs not included in the new frontbench could be hiding, as he said it had all been cut.

He said everyone will have a chance to perform and contribute to government when the people return the party to government after the next election. 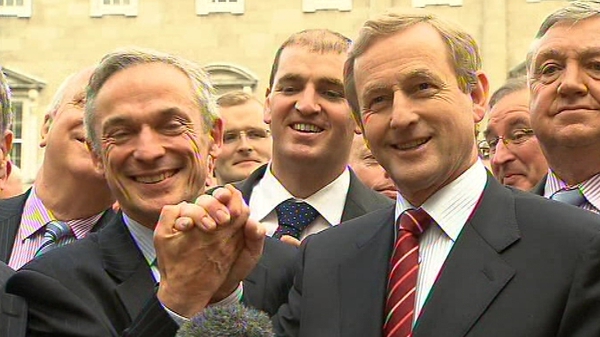