French unions staged nationwide strikes today and hundreds of thousands of workers took to the streets to protest against plans to raise the retirement age to 62.

Bernard Thibault of France's largest CGT union estimated that at least 2m protestors had joined some 200 rallies across the country.

He said this would pile pressure on the government to revise its contested pension reform.

'This draft bill will not get passed in its current form. The workers have decided to take to the streets in large numbers to prevent the text from getting passed,' he said as he headed the main rally through eastern Paris.

Police estimates of the number of demonstrators across France were not immediately available, but the turnout appeared to be greater than the last such protest in May when unions said 1m people took part.

Mr Sarkozy's government has vowed not to back down on the centrepiece of its reform - lifting the age of retirement to 62 from 60 by 2018 - saying the move was needed to prevent the pension system from going bust and sinking state finances.

But unions have succeeded in torpedoing previous attempts to overhaul state pensions and have pinned their hopes on massive support of their day of action to force a government retreat.

'We are all in the same boat,' said Jean-Luc Mariano, a dock worker who joined a march in the port city of Marseille.

'It is already hard enough working at the age of 56 in the docks. To add yet more years to that means we will never get to enjoy our retirement,' he added.

There was no immediate government comment on the protests.

The government unveiled its planned overhaul of the pay-as-you-go pensions regime last week, saying that without major changes the system would run up annual deficits of €100bn by 2050.

Although a retirement age of 62 is still lower than in many of France's neighbours, it breaks a significant taboo in a country where many see retirement at 60 - introduced by a Socialist government in 1983 - as their right. 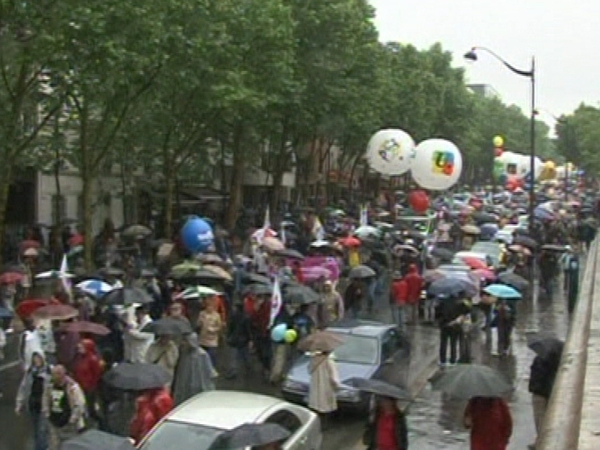 Thousands of French take to the streets