At the beginning of 1972 the security situation in Northern Ireland was spiralling out of control.

The Troubles had broken out three years earlier when police in Derry clashed with civil rights protestors demanding an end to discriminatory housing and voting practices against Roman Catholics.

Within 12 months British soldiers were deployed on to the streets following a summer of violent sectarian clashes between Protestants and Catholics.

The policy of detention without trial had the opposite effect: angering the nationalist community and increasing support for the IRA.

The Northern Ireland Civil Rights Association called for an end to the powers and protests were organised across the country.

This rendered all the subsequent civil rights demonstrations illegal gatherings.

A week before Bloody Sunday, soldiers fired plastic bullets and CS gas at protestors at one of these events on Magilligan Strand near Derry city.

Four days later, two RUC officers were shot dead by republicans in the nationalist Creggan area of the city.

While tension in Derry was high on the morning of 30 January, few could have predicted the bloodshed that followed.

It was just after lunch time when demonstrators started assembling in the Creggan for the latest NICRA protest march - this time the destination was the city's Guildhall.

2.50pm:
Due to get under way at 2pm, the start is delayed by 50 minutes to accommodate the steady stream of late arrivals. Marchers leave Creggan Drive and set off for the city centre, with hundreds joining in at almost every turn.

3.25pm:
The march passes the Bogside Inn bar and continues on to William Street. Estimates at the size of demonstration at this point vary. Organisers claimed up to 20,000 people were involved, while the Widgery Inquiry into the killings put it at a more conservative 3,000 to 5,000.

3.45pm:
With the British Army having erected barricades blocking the way to the Guildhall, the main body of the march turns left on to Rossville Street toward the revised rallying point at the Free Derry corner at the entrance to the nationalist Bogside estate. A number break off and continue down William Street to confront soldiers at a barricade. Some rioting ensues. Minor clashes between stone throwers and security forces at this junction were commonplace, with locals dubbing the area 'aggro corner'.

3.55pm:
Before the main shooting incident and at a location away from both the riot and march, two soldiers in a derelict building on William Street fire a number of rounds after claiming they had come under attack. Two men were injured. One of them, 59-year-old John Johnston, died six months later and is acknowledged as the 14th victim of Bloody Sunday. An Official IRA member is believed to have fired at the building during this incident, but whether it was before or after the soldiers shot is a matter of contention.

3.56pm:
Rioters disperse from William Street after the British Army deploy water cannon. Paratroopers request permission to commence an arrest operation on those who had fled down Chamberlain Street and Rossville Street.

4.07pm:
A company of paratroopers, led by Major Ted Loden, is given an order to start arresting any remaining rioters in William Street. But they are told not to engage in a running battle down Rossville Street.

4.10pm:
The soldiers open fire on people in the area of Rossville flats.

4.40pm:
The shooting ends. As well as the 13 fatalities, 14 others were wounded. 21 soldiers fired in the incident, expending 108 rounds in total. The British Army claims it came under fire in the Rossville flats area, allegedly by the Provisional IRA. Eyewitnesses insist none of the dead were armed.

Key Facts about the Saville Inquiry

The team was chaired by Lord Mark Saville of Newdigate alongside judges William Hoyt, from Canada, and Australian John Toohey.

The inquiry cost £190.3m, as of February 2010, interviewed and received statements from around 2,500 people and 922 of these were called to give oral evidence.

There are 160 volumes of data with an estimated 30m words, which included 13 volumes of photographs, 121 audiotapes, 10 videotapes. 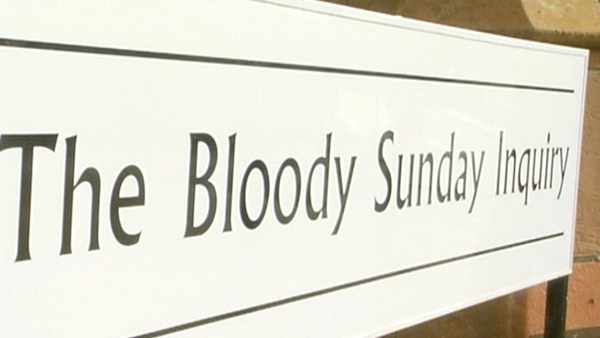