British Prime Minister David Cameron has apologised for what he said were the 'unjustified and unjustifiable' events of Bloody Sunday.

He was speaking following the publication of Lord Saville's inquiry into the killing of 14 civilians in Derry in 1972.

In a statement, he said the 5,000-page report found that 'on balance' British troops fired the first shots during the 'tragic events' of 30 January 1972 without issuing a warning.

He told MPs: 'The conclusions of this report are absolutely clear. There is no doubt, there is nothing equivocal, there are no ambiguities.

'What happened on Bloody Sunday was both unjustified and unjustifiable. It was wrong.'

The lengthy and massively costly inquiry also concluded that Northern Ireland's Deputy First Minister Martin McGuinness was present at the time of the violence and 'probably armed with a submachine gun' but did not engage in 'any activity that provided any of the soldiers with any justification for opening fire'.

The soldiers of Support Company who entered the Bogside area of Derry 'did so as a result of an order ... which should have not been given' by their commander, the report said.

The civilians died after troops opened fire on a civil rights march.

Mr Cameron said Lord Saville 'finds that on balance the first shot in the vicinity of the march was fired by the British Army.

'He finds that none of the casualties shot by the soldiers of Support Company was armed with a firearm.'

While shots were fired by republican paramilitaries 'none of this firing provided any justification for the shooting of civilian casualties'.

Lord Saville found that 'in no case was any warning given before soldiers opened fire'.

There was a 'serious and widespread loss of fire discipline' among the troops and that none of the soldiers 'fired in response to attacks or threatened attacks by nail or petrol bombs'.

Many of the soldiers 'knowingly put forward false accounts in order to seek to justify their firing'.

Lord Saville's findings disclosed that many of those shot were fleeing the troops or assisting the wounded.

While the report concluded that 'immediate responsibility' lay with those members of Support Company who engaged in 'unjustifiable firing', Mr Cameron said that the use of terms such as 'murder and unlawful killing' was not a judgment the Saville tribunal - or politicians - could make.

But he acknowledged: 'These are shocking conclusions to read and shocking words to have to say.

'We do not honour all those who served with such distinction by keeping the peace and upholding the rule of law in Northern Ireland by hiding from the truth.'

Families of the Bloody Sunday victims gave a triumphant thumbs-up as the report into the deaths was published.

They waved a copy of Lord Saville's report at the Guildhall in Derry as they prepared to listen to Mr Cameron’s assessment.

Crowds watched on a big outdoor screen as the British leader said he could not defend the British army by defending the indefensible.

The North's Chief Constable Matt Baggott and Alasdair Fraser, head of the Public Prosecution Service are to have talks to consider whether any of the paratroopers who opened fire on Bloody Sunday will face criminal charges.

Any decision is solely a matter for the PPS, acting independently in accordance with the Test for Prosecution, according to a statement from Alasdair Fraser's office in Belfast.

It added: 'The Director of Public Prosecutions, together with the Chief Constable, will consider the report to determine the nature and extent of any police inquiries and investigations which may be required to enable informed decisions as to prosecution to be taken.' 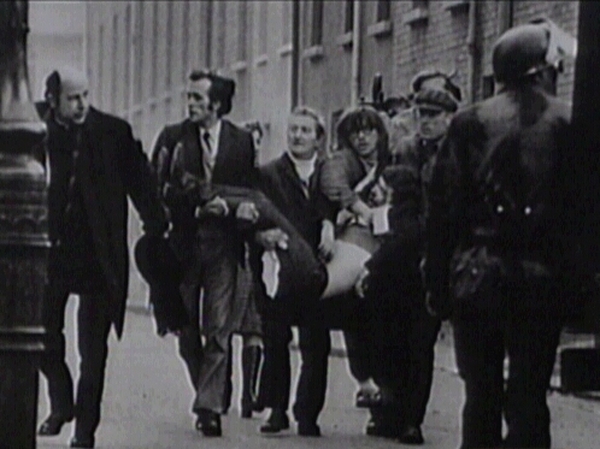