The authorities in Thailand have said security forces will open fire on anyone attempting to loot or commit arson after protesters set fire to dozens of buildings across Bangkok.

An overnight curfew is in place in the capital and in 21 other provinces across Thailand.

Rioting and fires swept across Bangkok after troops stormed a protest encampment, forcing protest leaders to surrender but sparking clashes that killed at least seven people and triggered unrest in northern Thailand.

The store was gutted by fire and looked like it may collapse, said a Reuters witness.

The unrest is now the ‘most widespread and most uncontrollable’ political violence Thailand has ever seen, said Charnvit Kasetsiri, a prominent political historian.

It remained unclear whether the continued rioting, after the protest leaders surrendered, was a last outpouring of anger by anti-government forces, which would give Thai finance markets a reprieve, or the start of more intense, widespread fighting.

‘The situation is worse than expected now and it's very difficult to stop,’ said Kavee Chukitsakem, head of research, Kasikorn Securities.

‘After the Red Shirt leaders surrendered, things were out of control. It's like insects flying around from one place to another, causing irritation.’

Thai Prime Minister Abhisit Vejjajiva imposed a curfew in Bangkok, a city of 15 million people, from 8pm until 6am tomorrow.

Travellers heading overseas or returning to Thailand during the curfew will need to show their passports to security forces to get through checkpoints.

Thai security forces will open fire on anyone attempting to loot or commit arson following the riots, a government spokesperson said.

‘Police and soldiers were instructed to resolve the situation and use weapons to deter or prevent those (arson and looting) acts,’ Tharit Pengdit, director-general of the Department of Special Investigation, said in a televised address.

A news blackout has also been imposed. ‘It's going to be hard to quell this, and tonight is going to be very ominous with the media taken off air and the curfew in place. There will be chaos and a widespread crackdown can be expected,’ said Charnvit.

Authorities have ordered medical and disaster teams to be on standby as troops continue operations overnight.

Thailand's stock exchange will remain closed for the rest of the week, as will the city's banks.

Troops in armoured vehicles and firing semi-automatic weapons advanced on the protestors' camp this morning in a bloody operation which led to several top protest leaders surrendering.

But that did not halt the unrest, which has descended into urban warfare, killing 42 people and wounding 336 in the past six days.

More than 68 have been killed and more than 1,700 people wounded since the demonstrations began in mid-March.

Several media organisations including the Bangkok Post and the Nation newspapers evacuated their office after a threat from protestors accusing them of biased reporting.

Power was lost in the Sukhumvit Road district, an area packed with tourists and high-end residential complexes, just hours after the army said the situation involving thousands of anti-government protestors was under control.

Many tourists remained holed up in their hotels unable to safely leave the buildings as sporadic violence erupted.

About 100 employees of the TV station Channel 3 were trapped on the roof of the highrise when it came under attack, but most were rescued by helicopters, local media said.

Violence also spread to northeast Thailand, a Red Shirt stronghold, where protestors stormed a town hall complex in the city of Udon Thani, setting a building ablaze, and torched a second town hall in Khon Kaen.

Unrest was reported in three other provinces. 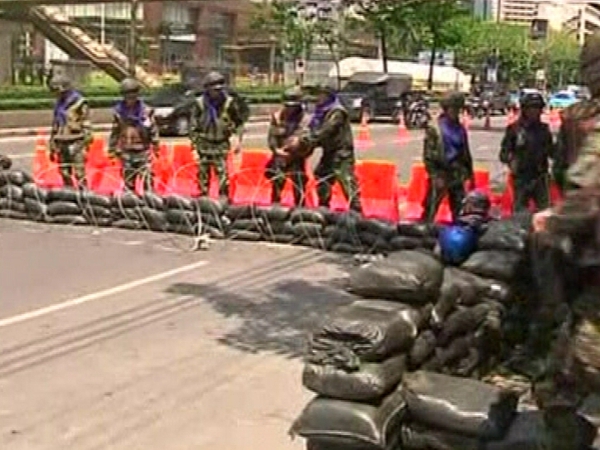