Irish airspace has reopened tonight for flight operations after six days of disruption due to a cloud of ash from a volcano in Iceland.

The Civil Aviation Authority of the UK has also sanctioned the resumption of full air service on a phased basis.

However, the Irish Aviation Authority has warned that it may take up to three days for full flight services to resume.

The IAA said that the lifting of restrictions is subject to the ash cloud not moving over Ireland overnight and no further aggressive volcanic activity.

There will be limited flight operations from Dublin airport tomorrow and Shannon airport has confirmed it's to remain open tonight and again tomorrow.

However Ryanair has cancelled all its scheduled flights to the UK until Friday afternoon and Aer Lingus has cancelled services, but that may be under review for tomorrow.

Commercial Director with Aer Lingus Enda Corneille said the airline has gotten all its aircraft back to Ireland and it is hoping to have a full service running from 1pm tomorrow afternoon.

Airport authorities are advising people to still check in with their airlines about when they can get a flight.

Meanwhile, Shannon Airport tonight accommodated the landing of five British Airways flights from various airports in the US, but it is hoped the aircraft will fly onto Britain tonight.

An Aer Lingus flight from Tenerife arrived in Shannon this evening and passengers were being accommodated on buses to travel back to Dublin.

The plane was carrying an estimated 100 passengers who had been at Tenerife Airport and whose return flights had been delayed.

Meanwhile, the Minister for Transport, Noel Dempsey, has rejected suggestion that the closure of Irish skies to airlines has been an over reaction.

Speaking in the Dáil this evening, Mr Dempsey also said he does not think the State will be compensating airlines who have lost money due to cancellations.

Met Éireann says it could be the end of the week before Irish airspace will be fully clear.

He said a reasonably strong south-westerly wind, which is forecast for Friday, should ensure that Irish airspace is cleared by late Friday or early Saturday.

The Government's emergency taskforce has said that weather forecasts still indicate that by the weekend the weather pattern should enable more flight restrictions to be eased over Ireland and Europe.

Maurice Mullen, chair of the committee, said the geological information available indicated that the volcano is generating less ash than previously, although there are still some smaller sporadic eruptions taking place.

Mr Mullen said the best estimate of the numbers of Irish people still caught up in the shutdown is 20,000 to 30,000.

He said based on their correlations with the movement through ferry ports, it is possible that 20% to 30% of that number may have already arrived back in Ireland.

Asked about the taskforce's advice to people who are due to travel next week, Mr Mullen said they should stay in touch with their carriers and listen to the advice given by them.

He said it was not for the taskforce to advise people on this matter.

Volcanic ash from Iceland has been recorded at ground level in Ireland.

The Centre for Climate and Air Pollution Studies at NUI Galway recorded particles in the air at its monitoring station at Mace Head on the Connemara Coast last night.

The particles were first recorded 3000 metres up but they then sank through the atmosphere to the ground.

The air particles comprised mostly sulphate with some 'dust' but they are within the acceptable EU levels for air pollution.

The particles themselves were less than one millionth of a metre in size, about the size of normal air pollution particles.

The particles at this level and concentration are not dangerous.

Speaking on RTÉ's News at One, the Director of the Centre at NUI Galway Professor Colin O'Dowd said there was no immediate reason for concern about air quality or public safety following the discovery of volcanic ash particles in Ireland.

He said a detailed analysis of the particles showed they were made up of sulphates and dust.

He said the concentration level was notable when contrasted with the normal maritime air found on the West Coast of Ireland.

Elsewhere, Iceland President Olafur Grimsson said European and international experts need to draw up plans on how to cope with a possible eruption from an even bigger volcano named Katla.
Mr Grimsson said it has a history of erupting twice a century and last erupted in 1918.

Meanwhile, Aer Lingus says that by the end of 19 April, approximately 1,100 of its flights were cancelled.

The airline has estimated that the disruption caused by the volcano has cost between €15m and €20m.

It said it is losing between €4m and €5m a day because of the continued cancellations.

However, the airline said it had substantial cash reserves and could withstand a sustained closure of airspace. 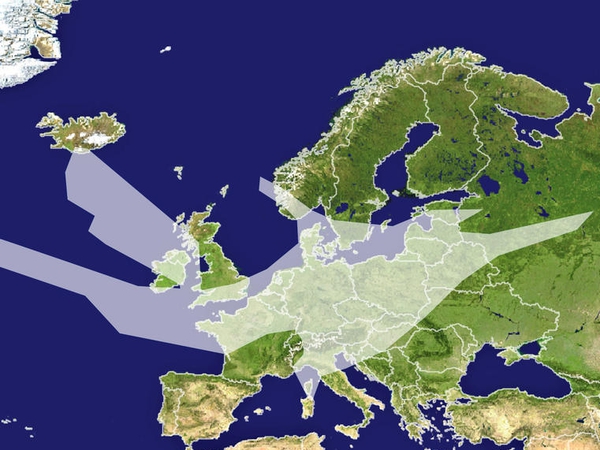