Polish and foreign leaders attended a funeral mass today for President Lech Kaczynski and his wife Maria, but a volcanic ash cloud over Europe prevented some overseas guests from joining them.

President Mary McAleese and US President Barack Obama were among those forced by the ash cloud to abandon plans to attend the funeral in Krakow for the Kaczynskis, killed on 10 April with 94 other, mostly senior, political and military officials in a plane crash in Russia.

However, Russia's President Dmitry Medvedev managed to fly to the city, reinforcing a strong message of Russian solidarity since the crash that has raised Polish hopes for an improvement in long-strained ties with their communist-era overlord.

‘The tragedy of eight days ago and the sympathy and help extended by the Russians in these days give us hope for better relations between our two great nations. I direct those words to Mr President Medvedev,’ Dziwisz said.

Nearby, the coffins of Poland's first couple were both draped with the red and white national flag.

They had insisted the funeral go ahead today, despite the ash cloud that has closed Polish and other European airports.

Outside, an estimated 50,000 mourners watched the mass on large screens.

The Kaczynskis' coffins were later to be taken to Wawel cathedral where they are to be laid to rest in a crypt normally reserved for Polish kings, national heroes and poets.

The funeral crowns a week of unprecedented national mourning for the Kaczynskis and the 94 others who perished in the crash.

In Warsaw, Poles had queued through Saturday night to view the coffins while they remained on public display.

Early this morning, the coffins were flown by military plane to Krakow at a low altitude because of the volcanic ash cloud.

Mr Obama said he regretted being unable to attend the funeral.

‘President Kaczynski was a patriot and close friend and ally of the United States, as were those who died alongside him, and the American people will never forget the lives they led,’ Mr Obama said in a statement.

But Germany's president and foreign minister joined the funeral after flying to Krakow from Berlin by helicopter. 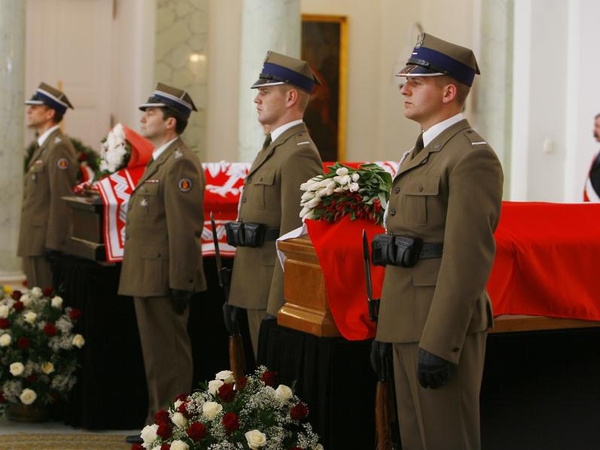