The Irish Aviation Authority has announced that it is lifting restrictions on flights to and from airports at Cork and Shannon and some of the regional airports.

However, as the latest reports from the Volcanic Ash Advisory Centre in London indicate that the ash cloud is still over the east coast, the restrictions will remain in force at Dublin airport until, at least, 11am tomorrow.

The ash is coming from Iceland where the Eyjafjallajokull volcano has been erupting since March.

All flights into and out of Dublin, Shannon and Knock airports were grounded earlier today and sections of Irish airspace were closed due to the plume of volcanic ash that is moving across Europe.

Up to 60,000 passengers in Dublin have been affected by the disruption, with thousands more passengers at Shannon, Knock and Cork airport also being affected.

Over 100 flights into and out of Ireland were cancelled due to the problem.

The Irish Aviation Authority has been told by the Volcanic Ash Advisory Centre in London that the plume is likely to grow in size tomorrow and remain over Northern Europe.

A spokesperson said it is likely that the ash will encroach further into Irish airspace tomorrow.

People intending to travel have been advised to check their airline's website.

The Health Service Executive has advised that the plume of ash does not pose a significant health risk because it is currently at high altitude.

The HSE said even if the plume does drop towards the ground, the amount of ash would be too small to cause significant effects on health.

Meanwhile, ferry companies have seen a huge surge in demand for their services today.

Irish Ferries say it has had busiest day of sales in their 30-year history.

Britain also barred flights in its air space, except in emergencies, until at least 6am tomorrow, with a flight returning soldiers from Afghanistan having to be held in Cyprus.

It was the first time within living memory that a natural disaster had caused such a halt, a spokeswoman for Britain's National Air Traffic Service (NATS) said.

French authorities said they would close 24 airports across northern France, including in Paris. Brussels, Amsterdam and Geneva airports said they had cancelled a large number of flights.

Finland closed all airports except Helsinki-Vantaa. A total of 466 flights to and from Spain have been cancelled, while Poland has closed its airspace over the north of the country.

Air travellers hit by the grounding of all flights by the volcanic ash threat can still claim most of their EU rights even though the disruption is beyond airlines' control.

Travel operators remain liable to reimburse ticket fares or to re-route their stranded passengers - but will not have to pay financial compensation for delays or cancellations, because of the special circumstances.

A range of automatic rights were introduced by EU legislation six years ago, covering meal and accommodation costs if necessary depending on the length of delays, and financial compensation for cancellations or for ‘denied boarding’ - being bumped off overbooked flights.

But the rules say such obligations on air carriers ‘should be limited or excluded in cases where an event has been caused by extraordinary circumstances which could not have been avoided even if all reasonable measures had been taken’.

Those circumstances include ‘political instability, meteorological conditions incompatible with the operation of the flight concerned, security risks, unexpected flight safety shortcomings and strikes that affect the operation of an operating air carrier’.

With airspace and airports closed in EU countries including the UK, Ireland, the Netherlands, Belgium, Sweden, Denmark and Finland, EU Transport Commissioner Siim Kallas praised the efforts of aviation authorities but made clear that some passenger rights would apply despite the ‘very exceptional circumstance’.

He said the volcanic ash cloud was a very significant threat to air safety and national authorities were required by international law to take steps to ensure safety.

‘In this case, the airports and those responsible for air traffic control have taken very swift and appropriate action to safeguard the public, and there is excellent co-ordination and co-operation at European level, notably within Eurocontrol.

‘But, even in exceptional circumstances, EU passenger rights continue to apply and air travellers should speak up to claim their rights.’

The National Emergency Response Co-ordinating Committee has said it is unlikely that aircraft will be able to fly again for some time, possibly the next two to three days.

Maurice Mullen Assistant Secretary of the Department of Transport said although aircraft had been grounded until the morning he was not expecting any planes to be able to fly tomorrow.

He said there are currently no plans in place for holiday makers who are stranded abroad because the focus up to now has been on the health and safety aspects of the situation.

However, he said as time goes on it would be an issue of concern for the Committee.

And he said the advice to people was not to go to the airport and to keep checking with their airline.

Gerard Fleming of Met Éireann said high pressure in the northwest was directing the ash towards Ireland.

He said he did not see the weather pattern changing within the next few days so if the volcano continues to spew ash it will continue to come this direction.

Coastguard helicopters based in the east and southeast will not be allowed to fly tonight between 10:30pm and 4:30am because of the volcanic ash in the air.

The Shannon and Sligo based Coastguard helicopters will continue to operate throughout the night but they w ill not be able to fly into this area.

The naval patrol vessel, the LÉ Ciara will be stationed off the southeast coast and all local RNLI lifeboats will be on standby to strengthen search and rescue capabilities in the area.

Chris Reynolds of the Irish Coastguard said this had never happened before and the measures were being taken for the safety of crew.

The National Emergency Response Coordinating Committee are due to meet again at 11am tomorrow morning.

The volcano on the Eyjafjallajokull glacier in southern Iceland began erupting just in March.

Icelandic public broadcaster RUV reported that a 500m fissure appeared at the top of the crater just after midnight.

Lava melted the glacier, causing major flooding which forced the evacuation of between 700 and 800 people from their homes in the remote, lightly populated area 125km east of Reykjavík.

'We have two heavy floods coming out from the melting of the Eyjafjallajokull glacier,' police spokesman Roegnvaldur Olafsson told AFP.

'It is very variable how long these eruptions last... Judging from the intensity of this one, it could last a long time,' Magnus Tumi Gudmundsson, a professor of geophysics and civil protection advisor in Iceland, said.

Last month, the first eruption at the Eyjafjallajokull glacier since 1823 briefly forced 600 people from their homes in the same area.

Icelandic airports today remain open as wind blows ash away from the island. 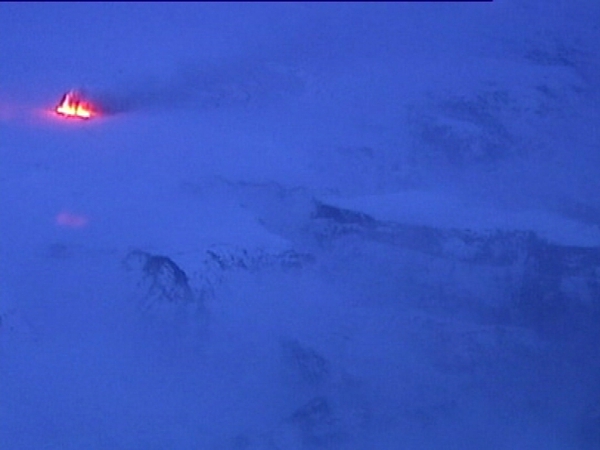