US President Barack Obama has thanked the Irish Government for allowing US troops to stop off at Shannon Airport, following talks with the Taoiseach at the White House this morning.

Brian Cowen is in Washington for the annual St Patrick's Day celebrations.

After a 40-minute meeting in the Oval Office, the leaders said they saw signs of economic stabilisation on both sides of the Atlantic.

Mr Obama said the US and Ireland would continue to coordinate with international organisations and bilaterally ‘to see how we can spur investment and private sector growth on both sides of the Atlantic’.

Mr Cowen said the two countries were working together on how best to ensure that both economies recover 'as quickly as possible’.

The Taoiseach and his wife, Mary, earlier attended a breakfast hosted by US Vice-President Joe Biden and his wife, Dr Jill Biden.

There has also been the traditional St Patrick's Day Speaker's Lunch on Capitol Hill.

In her remarks, Speaker Nancy Pelosi jokingly told Mr Cowen that there has been a tradition of St Patrick's Day parades for almost 200 years longer in the US than in Ireland.

She added that if America is the melting pot then St Patrick played an important role in that mix.

President Obama recalled the memory of Senator Ted Kennedy and the role he played in forging links between the two countries.

He also praised the role played by Northern Ireland's First and Deputy First Minister, Peter Robinson and Martin McGuinness, who were also at the lunch.

This evening, President Obama and his wife Michelle are hosting the St Patrick's Day Reception at the White House.

Elsewhere, US Secretary of State Hillary Clinton said she is looking forward to a brief stopover at Shannon Airport this evening during a journey from Washington to Moscow.

Mrs Clinton said she would use the hour-long stopover to celebrate St Patrick's Day.

The Taoiseach, the Tánaiste, nine ministers, 11 junior ministers and the Attorney General have flown out to visit the Irish diaspora in 46 locations around the world. 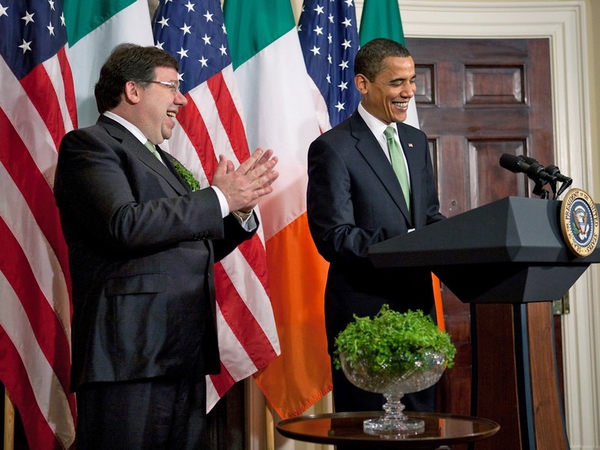