Former Green Party leader Trevor Sargent has resigned Minister of State in the Department of Agriculture after accepting that he made 'an error of judgement' in contacting gardaí about a case involving a constituent.

In a brief statement to the Dáil, Mr Sargent said he had contacted gardaí in relation to an alleged assault on a constituent in September 2007.

He said this person had come to see him in June 2008 to voice his frustration at the slow progress being made with the case.

The constituent alleged he had been head-butted after reporting vandalism to the parents of a child he had seen trying to remove a road sign.

Mr Sargent said his intention then was to ensure the gardaí were aware he had received this representation from the victim of an alleged assault and that the preparation of the case would benefit from witnesses not then interviewed.

What he had done had not been a criminal offence, but could be deemed to be not lawful, he stated.

'It had been an error of judgment', Mr Sargent said, before tendering his resignation.

Under Dáil rules, the Opposition was not allowed to comment.

Speaking this evening on RTÉ's Six One News, Mr Sargent said he got too involved in the language he used in the letter and in hindsight he said it was the wrong thing to do and he should not have written it.

Mr Sargent said the individual concerned needed a helping hand, but said he was not trying to interfere with the judicial process.

Asked if should also step down as a TD over the affair, Mr Sargent said the people of Dublin North would decide that at the next election.

The revelations that cost him his job were greeted with incredulity across Leinster House, as Mr Sargent is regarded as having strong principles.

He stepped down as leader of the party following the last General Election in 2007 because he had previously said he would not serve with Fianna Fáil in Government.

But eight years ago he led the criticism of then Junior Minister Bobby Molloy, who had to resign after his office contacted a judge in a rape case.

On 17 April 2002, Mr Sargent told the Dáil: 'Any representation relating to a court case ought to be acknowledged with a warning about the need not to interfere in any way with due judicial process.'

This afternoon the same issue has caused the end of his tenure as a Minister of State.

The Garda Commissioner earlier requested an urgent report into the allegations regarding Mr Sargent.

Fachtna Murphy asked local garda management in the division to compile a report for him on the facts of the matter.

The Taoiseach has said that Opposition claims that Fianna Fáil had a hand in the leaking of a letter that prompted the resignation of Mr Sargent were beneath contempt, without foundation and had no basis in fact.

Speaking to RTÉ tonight, Mr Cowen accused the Opposition of using smear tactics to besmirch what had been an honourable decision by Mr Sargent.

As to where the leak of the letter had come from, the Taoiseach said he presumed the information came to light when a related case came up for mention in the courts earlier this month.

Earlier this evening, Minister for Justice Dermot Ahern said the first he had heard of the affair involving Mr Sargent was when he heard radio news at lunchtime.

He angrily denied any involvement in leaking details of the matter and said his Department first became aware of the letter when the Garda Commissioner telephoned the Secretary General after a media inquiry today.

Mr Ahern described Mr Sargent as a 'friend' and said he was sorry to see him resign.

Meanwhile, Green Party leader John Gormley has said he cannot speculate on suggestions that Fianna Fáil was responsible for leaking the story which led to today's events.

Mr Gormley said it was not always a good idea to make comments when you are feeling emotional, and therefore he would not speculate.

He said he did not have all the facts in his possession, but he hoped to get to the bottom of the issues.

The Minister for Communications, Eamon Ryan, has said it is not for the Greens to be suspicious or throw stones in trying to find out the source of the story.

Mr Ryan told RTE's Prime Time programme that they did not know how the story came out.

He said most of speculation about the story's origins was coming from Fine Gael and Labour.

Asked if there should be a garda inquiry into the circumstances of Trevor Sargent's intervention, Mr Ryan said that was a matter for the gardaí.

Minister for Agriculture Brendan Smith has acknowledged 'the very significant contribution' that Mr Sargent had made since his appointment as Minister of State for Food and Horticulture in 2007, both to the work of the Department generally and the organic and horticulture sectors in particular.

Mr Smith said Mr Sargent had, at all times, displayed great energy and commitment to his role as Minister of State and was widely respected.

The Minister said Mr Sargent was an excellent and hardworking colleague and thanked him for his assistance and commitment.

He wished Mr Sargent personal and professional success in the future.

On RTÉ Radio's Drivetime, Minister for Communication Eamon Ryan said it was a 'sad day' and had been very difficult for Mr Sargent.

He said the former Minister of State had a 'fine career'. Mr Ryan said Mr Sargent was 'highly regarded' in the party and was a 'very active and committed representative'. 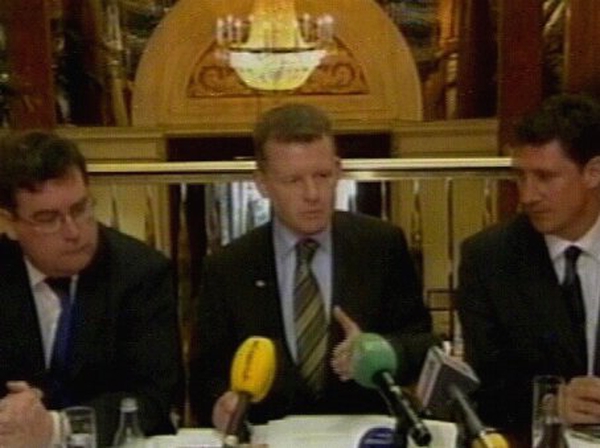