In an interview with the BBC, Mr Papandreou said Greece so far is meeting goals set out in an austerity plan.

Market concerns about Greece's debt problems have hit the euro in recent weeks.

'At this point we don't have a need for borrowing, our borrowing needs are covered until mid-March,' he said in response to a question on whether there would be any new Greek bond issuance next week.

Mr Papandreou said that despite street demonstrations against austerity measures his government has taken to tackle the debt crisis, he believed there was broad support in Greek society for painful economic reforms.

'What we're seeing here, and I haven't seen this except during the Olympic Games in 2004, is a real sense of unity by the Greek people of wanting to make a change,' he said, blaming the previous administration for Greece's debt woes.

Mr Papandreou said European Union partners should continue to offer political support to Athens as it battles to get its public finances back onto a sustainable path.

'Let us together with the EU authorities, the Commission and the European Central Bank, let's sit down, let's look at how our progress is doing, how we're doing in the stability and growth plan that we have tabled,' he said.

'We're on target, beyond target on January statistics so we're doing well. If we do need extra measures, we will take extra measures in order to reduce our deficit this year by 4%. We're ready to do so if necessary.'

Mr Papandreou said that while Greece was not asking for financial support from EU partners, it did need strong political backing as it battled to restore its credibility with financial markets.

This was particularly important for Greece to be able to borrow at lower interest rates than it was currently facing, he said.

'We need the help so that we can borrow at the same rate as other countries, not at high rates which undermine our ability to make the changes we need to make,' he said. 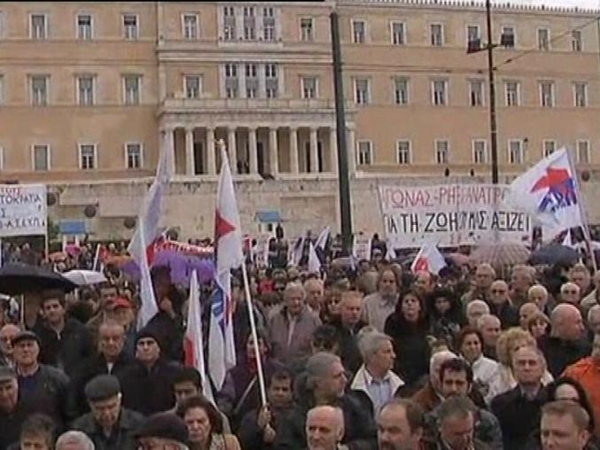