Former Minister for Defence Willie O'Dea has said he decided to resign when it became clear that the Green Party would no longer support the Government if he was to stay in office.

Speaking to RTÉ News, he said it would be a disaster if the Government was to fall right in the middle of a serious economic crisis.

He said that in the interests of the country and in order to protect the stability of the Government he had 'decided there and then' to offer his resignation.

Willie O'Dea said it was clear that if the Green Party did not continue to support the Government it could not survive and that is why he took the decision he did.

The former minister said he had paid the ultimate price for the mistake he had made and that was 'the harsh reality of political life.'

He said he had made no decision yet on his own political future but had been receiving huge support in Limerick throughout the day.

Mr O'Dea declined to say where or not he would be seeking re-election.

Earlier, the Garda Commissioner said gardaí will consider whether an investigation is warranted into claims that a member of the force supplied certain information to former Minister for Defence Willie O'Dea.

Mr O'Dea had claimed that a member of An Garda Síochána was a source for defamatory information regarding Sinn Féin Cllr Maurice Quinlivan.

Minister for Justice Dermot Ahern said it was entirely a matter for the gardaí and he would not be intervening.

Earlier, Government Chief Whip Pat Carey said a number of new factors combined yesterday, which meant that the vote of confidence in Mr O'Dea could no longer stand.

Mr Carey said the Minister's interview on the News at One and the mention of garda involvement in providing the information for his false affidavit to the High Court changed the situation.

Also on Morning Ireland, Labour's Justice Spokesman Pat Rabbitte said the trust between the coalition partners had been undermined.

The Chairman of the Green Party Dan Boyle said the party was 'obviously unhappy' about the manner in which the events leading up to Mr O'Dea's resignation had unfolded.

Senator Boyle said there had been no time for proper consideration, consultation or reflection before the Government's vote of confidence in the former Minister on Wednesday.

He said yesterday's events, including the broadcast of the tape recording of Mr O'Dea's interview with Limerick Leader journalist Mike Dwane and an interview on the News At One, 'recoloured' the situation for the Greens.

Speaking in Cork today, Mr Gormley said he and his party colleagues were always uneasy about the 'smear aspect' of Mr O'Dea making allegations Mr Quinlivan.

Last night, Mr Gormley admitted that his party was taken by surprise by the Taoiseach's decision on Wednesday to have an early confidence motion in the Dáil on Mr O'Dea.

Mr Gormley said his party had not been in the business of issuing ultimatums to Brian Cowen on the Limerick East TD's position. (Watch Mr Gormley's interview on RTÉ's Nine News)

Mr O'Dea stepped down last night after withdrawing a High Court affidavit in which he had sworn false information.

Mr O'Dea's resignation statement came after a day of increasing speculation that his position had become untenable in the face of hardening attitudes in the Green Party.

An overly aggressive performance in Wednesday's confidence debate did not impress his Fianna Fáil colleagues, nor did an attempt at abject contrition on yesterday's RTÉ Radio's News at One.

Mr O'Dea spoke to Mr Cowen after that interview, a conversation that may have sealed his fate.

The mood was soured within the Greens when the party was 'bounced' into supporting the motion.

The Taoiseach said he was assigning the Defence portfolio to himself for the present.

In a statement, Mr Cowen said he wished to thank Mr O'Dea for his hard work and commitment in carrying out his Ministerial duties. 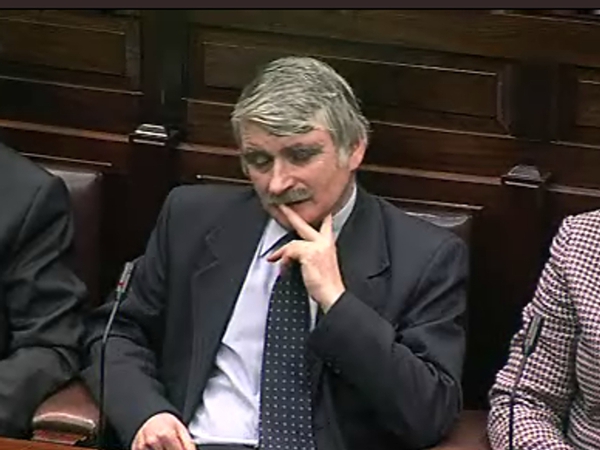 FG motion of no confidence in O'Dea