US President Barack Obama has described Northern Ireland's power-sharing deal as an important step on the path to greater peace and prosperity.

The US president said he is looking forward to meeting political leaders behind the agreement on St Patrick's Day in Washington DC.

‘The president appreciates the personal contributions and steadfast support of the Taoiseach and UK Prime Minister Gordon Brown in support of the historic agreement achieved by Northern Ireland leaders today, which is an important step on the pathway to greater peace and prosperity for all communities on the island,’ a White House statement said.

Earlier, US Secretary of State Hillary Clinton said the deal on the devolution of policing and justice powers in NI was 'another important step toward full and lasting peace'.

Mrs Clinton said: 'The accord they reached today will help consolidate the hard-won gains of the past decade.

'Northern Ireland gives us hope that, despite entrenched opposition and innumerable setbacks, diligent diplomacy and committed leadership can overcome generations of suspicion and hostility.'

Policing and justice powers will be devolved to Northern Ireland from 12 April following the deal agreed by the DUP and Sinn Féin.

The settlement will see the devolution of policing and justice powers from Westminster to the Assembly within weeks, satisfying a key republican goal, while new arrangements for overseeing Orange Order parades will meet the demands of unionists.

The talks were the longest set of continuous negotiations held in the peace process.

With Sinn Féin accusing the DUP of stalling on the transfer of policing powers for the last three years, it was feared that failure to find agreement could see the collapse of the power-sharing government led by the two parties.

However, DUP leader Peter Robinson emerged from a late-night meeting of party colleagues to confirm that he had secured unanimous support for the proposals.

Flanked by DUP Enterprise Minister Arlene Foster and Finance Minister Sammy Wilson, Mr Robinson said all members of his party were behind the blueprint for agreement.

But, in an early sign of potential discord, the Ulster Unionist party said it would not be attending the round table meeting with Brian Cowen and Gordon Brown.

During the negotiations the party consistently complained that it had been kept in the dark.

A spokeswoman said members wished to have sight of the proposed agreement before they give their response to the two governments.

'We have not had sight of this agreement and until we do we will not be signing up to it,' she said.

British and Irish leaders in NI

Mr Brown praised the settlement saying: 'The achievements have been as great as they are inspirational.

'This moment and this agreement belongs to the people of Northern Ireland, all of the people, and now more than ever before so does their future.'

'This is the last chapter of a long and troubled story and the beginning of a new chapter after decades of violence, years of talks, weeks of stalemate.'

'That better future must be built on mutual respect for people of different traditions, equality and tolerance and respect for each other's political aspirations and cultural expressions and inheritance.'

First Minister Robinson welcomed the deal and said: 'There are some who will play politics with this agreement but the real focus in the months to come must be on building an administration at Stormont that our whole community identifies with and supports.'

Deputy First Minister Martin McGuinness said that as an Irish republican he wanted to see a united Ireland but recognised that unionists preferred to maintain links with Britain.

'We need to make life better for our children and grandchildren,' he said.

'That is what this agreement must mean in practice.'

Speaking later on RTÉ's News At One, Mr McGuinness said the deal would be widely welcomed in Northern Ireland and throughout the island.

'Game is up ' for dissident groups - Woodward

He said the agreement would ‘absolutely’ make Northern Ireland a safer place, and said it reached out to all communities in the province.

Mr Woodward told BBC Radio 4's Today programme: ‘This political agreement will be the last part of the jigsaw which is predicated on the entire peace process...

‘If everybody embraces this agreement in the spirit with which it was created... I think people will see that this agreement is above the politics of any one-party interest, it is genuinely reaching out to the interests of all the people in Northern Ireland.’

Mr Woodward said the violence seen over the last few years was driven by a group of people who want to destabilise the political process and undermine peace.

He hailed the ‘leadership’ of senior figures in all parties in the talks, who had found ways to compromise without giving up their principles.

Chief Constable Matt Baggott welcomed the announcement, saying he believed that devolution is a step to a safer, secure and more peaceful Northern Ireland. 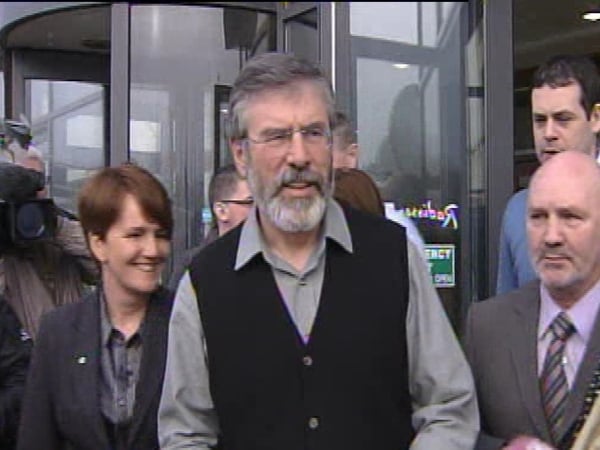 Adams warns of crucial period ahead