Earthquake-ravaged Haiti turned down an offer of troops from the neighbouring Dominican Republic, forcing the UN to look elsewhere for additional peacekeepers.

The two states share the Caribbean island of Hispaniola but have a history of tense relations.

The Dominican Republic had offered an 800-strong battalion to form part of the reinforcement of the UN peacekeeping force in Haiti. It was originally expected to secure a humanitarian corridor from their joint border to the Haitian capital Port-au-Prince.

A UN official confirmed that Haiti turned down the offer but said the decision might not be definitive and talks were underway to see if Haiti would allow a rescue team or police from the Dominican Republic to help with the relief efforts.

The full potential strength of the UN peacekeeping forces is now 12,651, up from the current level of around 9,000, after a UN Security Council resolution adopted on Tuesday.

The damaged main port in Haiti is reopening for service on Friday, a US general said, as a French vessel had already begun unloading aid supplies at Port-au-Prince.

‘We will have the port open Friday for business,’ said Lieutenant-General Ken Keen, who is in charge of supervising the US military operations to help Haiti, left in ruins in a 7.0-magnitude quake on 12 January.

‘We've been doing assessments all week to ensure it is safe to offload cargo here,’ he added, saying he hoped to have the port fully operational in three weeks.

However eyewitnesses reported seeing that a French ship, the Francis Garnier, was already docked along the quay unloading relief aid and equipment.

Access to the port, which remains under Haitian control, will help unclog the capital's airport which was also damaged in the quake and only has one runway.

The massive aid operation has jammed the airport and supplies have been frustratingly slow to reach the people in need.

Officials estimate that 75,000 were killed in the quake, and a million left homeless.

US Defense Secretary Robert Gates said earlier that he had ordered port clearance ships to deploy to Haiti which ‘within a week or two could get the port back in operation.’

Meanwhile, Aer Lingus is to fly an A330 aircraft directly from Dublin to La Romana airport in the Dominican Republic on Friday to deliver emergency medical and food supplies to earthquake survivors in Haiti.

The decision to fly into La Romana airport instead of Port Au Prince in Haiti was taken due to safety concerns following today's severe aftershock.

The mission, which is being implemented in co-operation with the aid agency GOAL, will also bring 15 doctors and volunteers to Haiti.

Over 25 tonnes of aid will be loaded into the hold and the body of the plane and the aircraft will leave Dublin airport at 1pm on Friday, arriving in the Dominican Republic at 7pm local time.

It will be on the ground there for two hours to unload before returning to Dublin via Orlando.

Arrangements have been made with GOAL representatives in Haiti to ensure that, once unloaded, the supplies will get to those who need them as quickly as possible.

All crews and operations employees are volunteering their time and all airport and navigational charges have been waived by both the DAA and the IAA in order to facilitate this mission.

The quake struck 59km west of the capital city of Port-au-Prince just after 11am (Irish time).

Residents reported a low vibration followed by a brief but more powerful rumbling at 6.03am local time.

People in Port-au-Prince have been sleeping outdoors since the earthquake because their homes were destroyed, or from fear of aftershocks.

Minister of State for Overseas Development Peter Power has confirmed that Ireland's consignment of more than 80 tonnes of emergency humanitarian supplies arrived in Haiti today.

The supplies of blankets, plastic sheeting for temporary shelter, water tanks, tents, mattresses, generators and kitchen sets will be distributed to more than 8,000 families.

The consignment is in addition to the €2m in immediate financial support which the Government committed to the UN and Irish aid agencies working in Haiti.

Minister Power also confirmed that three members of Ireland's Rapid Response Corps have been deployed to Haiti to assist in the international emergency effort in the wake of last week's devastating earthquake.

The consignment will be given to Concern and Goal for distribution.

GOAL Chief Executive John O’Shea said: 'Naturally we are delighted to be up and running and we expect that over the coming days and weeks we will expand our operations significantly.'

Fears of violence and looting have eased in the earthquake-devastated country as US troops provide security for water and food aid deliveries and thousands of displaced Haitians heed the government's advice to seek shelter outside Port-au-Prince.

While military escorts are still needed to deliver relief supplies, the UN said security problems were mainly in areas considered ‘high risk’ before the quake.

Some 4,000 criminals escaped from damaged prisons soon after the earthquake.

US accused over aid operation

US Black Hawk helicopters swooped down on the grounds of Haiti's wrecked presidential palace yesterday, deploying troops and supplies.

Around 12,000 US military personnel are on the ground in Haiti, on ships offshore or en route, including the USNS Comfort hospital ship, which was to arrive in the area today providing essential capacity for complex surgeries.

Venezuela's President Hugo Chavez has accused Washington of ‘occupying’ Haiti under the pretext of an aid operation.

In a bid to speed the arrival of aid and stem looting and violence, the UN Security Council this week unanimously agreed to temporarily add 2,000 UN troops and 1,500 police to the 9,000-member peacekeeping mission in Haiti.

The World Food Programme, which has fed 200,000 quake victims, aims to move the equivalent of 10 million ready-to-eat meals in the next week, the UN said.

An additional 130,000 have been fed by other relief groups.

Soldiers travelled to other towns outside the capital, to Leogane to the west and Jacmel on the southern coast, to guard and supply aid distribution points there.

In Leogane, the epicentre of the violent quake, the lack of advanced medical facilities prevented many severely injured from getting life-saving surgeries.

International health experts say the efforts in Haiti cannot stop once the immediate crisis is passed.

‘This is about stepping to the plate to the long run,’ Jon Andrus of the Pan American Health Organization said.

So far, feared infectious diseases have not shown up, although many injured face the immediate threat of tetanus and gangrene, and hospitals are overwhelmed.

The World Health Organization says at least 13 hospitals are working in the Port-au-Prince area and it is bringing in medical supplies to treat 120,000 people over the next month.

The UN said 121 people have been pulled from the rubble by the 52 rescue teams from around the world, and untold numbers of others by Haitians digging through collapsed buildings.

Overnight, further survivors were pulled from the rubble. Hoteline Losana, 25, was found in the wreckage of a supermarket only hours after Anna Zizi, who is in her 70s, started singing as she was carried away from the ruins of Port-au-Prince cathedral.

A three-week-old baby girl was also dug out of rubble in the city of Jacmel. 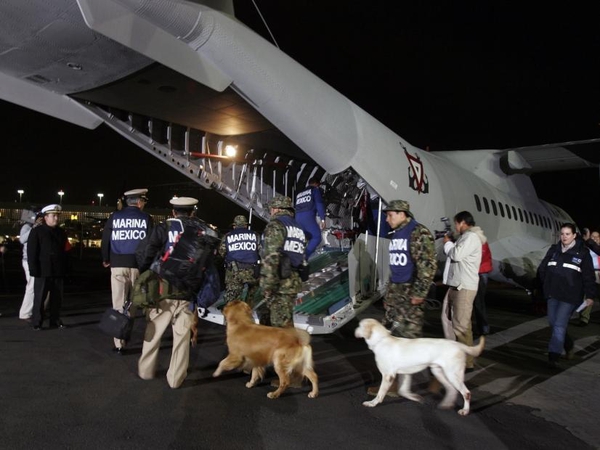 Looting in Haiti as aid trickles through