Met Éireann says temperatures may fall as low as -12C tonight and is warning that the severe weather could last for another ten days.

As the cold spell continues, the National Roads Authority has confirmed that salt supplies for gritting roads are at a critical level.

The NRA will be forced to conserve stocks over the weekend, so that it can ensure that roads will remain open on next week.

All road users are being warned to avoid any unnecessary journeys.

Roads remain icy nationwide and further snowfall will affect Leinster and Munster during Sunday and Monday with falls of 5cm to 10cm expected.

The majority of Bus Eireann services in the east are currently operating with some delays, while some local services operating on secondary roads are disrupted. Most services in the rest of the country are operating, with delays in a few areas.

Dublin Bus is running a full service but there are curtailments on some routes. However all Nitelink services have been cancelled tonight and tomorrow night.

Dublin Airport is open but a number of flights have been cancelled. AA Roadwatch says there are no major delays or cancellations at Cork or Shannon Airports.

Passengers are advised to check relevant websites before travelling.

Pedestrians are also being warned to be extra careful as footpaths in many parts of the country remain untreated.

Water collection points have been set up at various points around Limerick city for anyone whose supply has been affected by the freezing weather conditions.

Some properties are continuing to experience low water pressure or in some cases a full interruption to supply.

Some service pipes are still frozen and Limerick City Council say the city may have to wait for a rise in temperatures before there is a resumption of normal supply.

In a statement the Council said it was supplying a rotating hydrant standpipe operator to provide water to people who wish to collect it in containers.

It is warning that the water will still need to be boiled before use as a precaution.

In the capital, Dublin City Council has urged people to conserve water during the cold weather.

Water demand has remained at a very high level since before Christmas.

The Council says that a further sharp increase has occurred since the beginning of January. Demand is currently running at a higher level than at any stage in recent years.

Due to the cold weather the number of broken mains has increased, dramatically affecting supplies.

Carlow County Council is set to formally contact the Defence Forces to get help with transportation.

In addition to normal salting and gritting with lorries, Director of Services for Transportation with Carlow County Council Dan McInerney said the council has acquired 'a number of small fertiliser spreader units' to spread salt and grit from the back of pick-ups, in some cases 'using unsalted grit on secondary roads to preserve stocks of salt'.

They have mobilised both the civil defence and the fire service, which are helping out with four-wheel drive vehicles to provide back-up for ambulance services and help to deliver medical attention.

Workers at Foynes port have begun handling a 4,000 tonne salt cargo on board the MV Jumbo that arrived from Tees Port in the northeast of England overnight.

The shipment, which arrived at the Shannon Estuary at 3am, was due to be handled at Limerick Port at midday.

However, it was diverted to the company's other port at Foynes, 40km south, due to freezing fog along the estuary.

Parts of Cork city saw snow for the first time since the cold spell began three weeks ago.

Gardaí say the roads in and around the city centre are fine, but footpaths remain treacherous in many parts of the city.

The Lough, a well known inner-city lake, remains frozen over and gardaí have once again appealed to people not to walk on it.

The Irish Blood Transfusion Service has meanwhile warned that it may not be able to continue to meet hospital demand for blood because the weather has hit attendance at blood donation clinics.

A number of special clinics will be set up this weekend in a bid to replenish supplies. 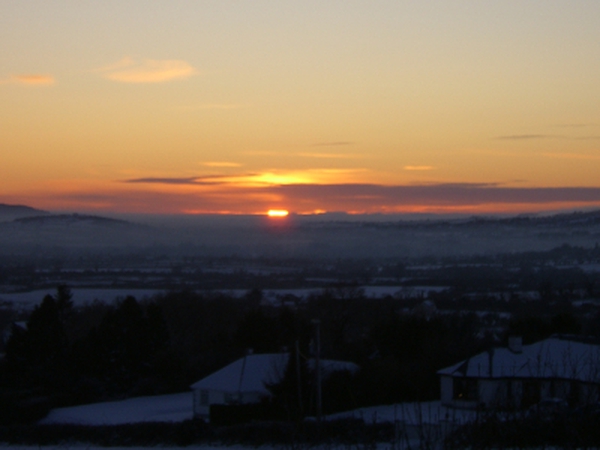