Thousands of people have been facing long delays as snow and ice disrupted air and road transport, particularly in Dublin and the eastern half of the country.

Met Éireann has issued a severe weather warning with temperatures expected to drop to -8C overnight.

Snow and ice has made driving conditions particularly dangerous and difficult throughout the day.

A number of routes in the capital were congested and drivers reported journeys across the city taking several hours.

Bus Éireann said that services in the east were suspended this evening because of the 'deteriorating weather and road conditions'.

In a statement it added: 'The operation of services in east of country tomorrow will be reviewed in early morning.'

Dublin Bus has also suspended all of its services for the rest of the evening because of the road conditions and people had to make their way home by foot.

It said the level of service in the morning will depend on how well the roads are gritted overnight.

All valid Dublin Bus tickets will be accepted for travel on Irish Rail and Luas services.

Both Bus Éireann and Dublin Bus said they will make information available to commuters as early as possible and are advising travellers to check media outlets and their websites before they depart.

There was some disruption to Red Line Luas services this evening, however the Green Line is operating as normal.

Iarnród Éireann has said that all rail services are operating despite the freezing conditions.

Dublin Airport has re-opened to flights after having suspended them for four and a half hours.

The Dublin Airport Authority said they had no choice but to close runways at 3:30pm because of the danger from of snow and ice.

This evening, there were reports of long queues of people waiting to re-book flights for tomorrow.

Gardaí are appealing to motorists to avoid all unnecessary journeys. Read the RSA's safety advice for drivers.

They have advised extreme care on all routes, particularly on secondary roads, in sheltered areas and in housing estates.

There was also heavy snowfall in parts of Co Carlow and Co Kilkenny.

Earlier, Dublin City Council said it has five gritting trucks out on the streets of Dublin.

The council says it will have seven trucks out gritting between 3.30am and 6am and collectively they will grit more than 300km of roadway.

Fingal County Council has also mobilised a full team and said it will be using salt on primary routes and low-grade sand on some secondary routes.

However, they are warning motorists to take care on these roads as they cannot be regarded as safe.

The National Roads Authority said the Dublin Port Tunnel remains open but that there have been some delays because traffic was being staggered through the outbound bore because of delays on the M1.

Sligo County Council has received fresh supplies of salt and says all main roads and Sligo town are fine, but the Strandhill Road is dangerous in parts and extreme care is needed on secondary roads.

This evening, the Department of Social and Family Affairs said poor weather has caused a delay in payment for 27,000 social welfare customers who should be paid by cheque tomorrow.

‘The cheques, which had been due to be collected by An Post staff from the Departments' Dublin Computer Centre, on Wednesday evening, were not able to be collected,’ according to a statement.

The Department said if any customer experiences financial difficulties as a result of this delay they should contact their Community Welfare Officer at their local Health Centre.

Meanwhile, the HSE has said that ambulance services in the Dublin region have been busier than usual because of the bad weather.

A spokeswoman for the HSE said the conditions for ambulance staff were challenging and that services overnight have been increased.

35 crews are now on call, which is above the usual amount for a Wednesday night.

The very cold weather could last at least another week. 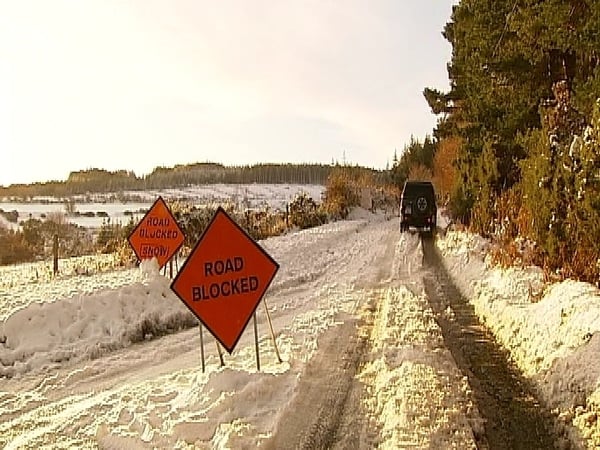