Met Éireann has renewed its severe weather warning, with snow expected in parts of Connacht, Ulster and Leinster.

Up to 5cm of snow is being forcasted by Met Éireann for east Leinster over tonight and tomorrow.

Severe weather conditions in the UK are having a knock-on effect on flights in and out of Ireland.

Aer Lingus is advising passengers to check their website for travel information, while Ryanair had to cancel its remaining flight schedule to and from Liverpool and Manchester airports this evening.

Knock Airport in Co Mayo has now re-opened after what the airport managing director described as 'blizzard conditions' forced it to close.

A number of flights were either cancelled or diverted to Shannon Airport, which has reported no delays or cancellations.

The northwest has been worst affected by the adverse weather conditions, as snow showers move down across Donegal into Mayo, Sligo, Roscommon and Galway.

In many places the snow is turning to ice, causing further hazardous conditions for motorists.

Further south, there has been significant disruption to public transport services in Limerick city, where only two bus routes are in operation.

Bus Éireann says most Limerick bus services are now back in operation.

In Co Clare, the company says all bus services have been restored but some are operating with delays.

Gardaí across the country are continuing to advise motorists against any unnecessary travel, as black ice is affecting even some major routes; the M8 Cashel between Tipperary and Cork and the N2 between Slane and Ashbourne in Co Meath are particularly dangerous.

Roads in Roscommon are also described as treacherous and it is understood the County Council has run out of grit and salt.

Cavan County Council has said its reserves are also critically low and that it is down to just one day's supply.

Yesterday a shipment of 4,000 tonnes of salt arrived at Ringaskiddy Port in Cork - it will be used to supply all local authorities around the country.

In Co Wicklow, a Group 4 Securicor van containing 'a quantity of cash' earlier skidded and overturned on the icy roads.

Fire brigade personnel cut two Securicor workers from the van - they were taken to Loughlinstown Hospital.

In Dundalk, gardaí are warning people not to leave their cars unattended with the engine running to warm them up.

The warning comes after two cars were stolen in the town earlier today.

Dublin Bus says it is operating a full service, however there are a number of areas where conditions are still poor and curtailments are in place.

Meanwhile in Britain, freezing conditions and heavy snowfall have affected the transport network there.

Manchester Airport was closed this morning, and flights were cancelled at Leeds Bradford and, Glasgow Airports. 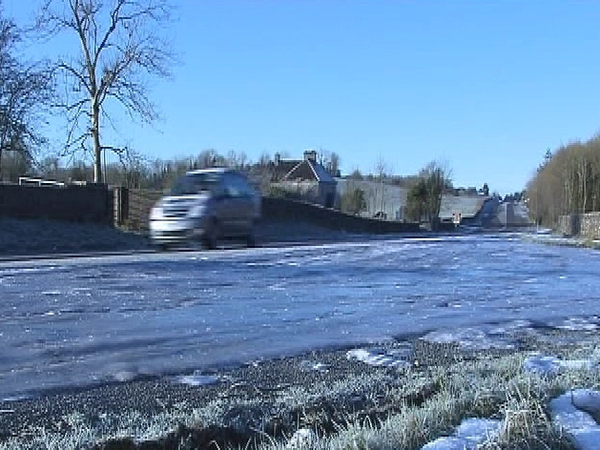 Many roads are impassable due to weather