ICTU General Secretary David Begg has said there is no prospect at all of reinstating social partnership.

Watch the Dáil debate on the Budget.

Speaking after a meeting of the ICTU Executive Council, Mr Begg said the Taoiseach had driven a 'stake through the heart' of social partnership as a concept when his Government unilaterally withdrew from talks on the public sector and imposed pay cuts.

However he said a lot off issues remained to be addressed, including private sector pay, a significant legislative programme, and institutional issues.

He said ICTU intended to proceed on two levels.

First, unions are engaging with private sector employers regarding the status of the 6% pay deal negotiated in September 2008, which has already been implemented by 123 firms, as well as the pensions crisis.

Second, the Public Sector Committee of ICTU is preparing a strategy to resist the pay cuts for Government employees.

Mr Begg was asked about earlier comments of Irish Bank Officials' Association General Secretary Larry Broderick, who said the campaign of resistance would be a political one, aimed at getting the Government out of power.

He said that Mr Broderick's comments reflected the mood of the meeting, but that ICTU had not adopted any formal position.

Arriving for today's meeting of the ICTU Executive Council, Mr Broderick said today's meeting would look in broad detail at how to address what he called 'the attack on pay and conditions' in both the public and private sector.

He said what would emerge would be a 'strategic' rather than a 'knee-jerk' response, but warned that from January there would be a 'winter of discontent'.

Asked whether union members already under financial pressure would be prepared for an all out strike, he said he did not think a full scale strike would emerge as a strategy unions would engage in.

Mr Broderick said they needed to focus on local issues, non co-operation and taking the Government out of power.

He predicted that their campaign of resistance would go in a political direction, as he did not think the current problems could be resolved purely on an industrial relations basis.

However, leader of the Association of Secondary Teachers John White said that strike action had not been eliminated from their consideration, warning that all forms of action were on the table and would be considered carefully.

He said public service unions were entirely alienated from this Government, and there would be no co-operation with it in the future.

ICTU president Jack O'Connor said unions had 'rolled over backwards' and tried everything they could to resolve the difficulties through negotiation and diplomacy but that had not worked - so they would have to do it 'the other way'.

Asked whether hard pressed union members facing pay cuts would be willing to go on all out strike, he said: 'Wait and see - watch this space'.

A Department of Finance spokesman said that workers to whom the public service pension levy does not apply will not be affected by the latest reductions.

The legislation giving effect to the public sector pay cuts announced in last week's budget has passed all stages in the Dáil.

Opposition motions seeking to include judges and Anglo Irish Bank workers into the measures were defeated.

The legislation now goes to the Seanad.

Earlier, Minister of State Martin Mansergh said those working in the NTMA would be exempt from the cuts despite the fact that they're included in the pension levy. 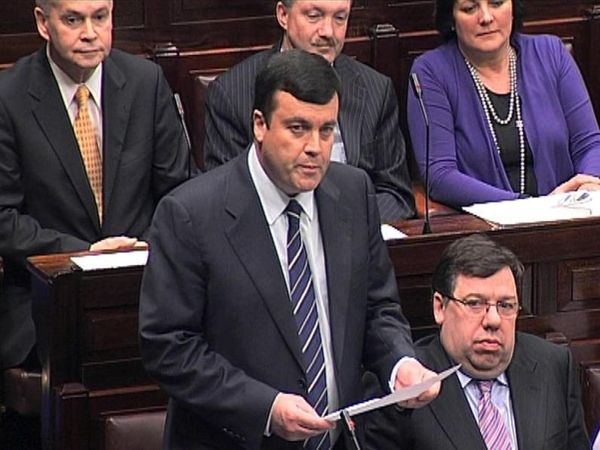