Further bad weather has resulted in flooding in parts of Dublin and Kildare.

The River Liffey has burst its banks at several locations, including at the Strawberry Beds in Dublin.

The ESB also said areas along the Liffey, especially in Co Kildare, are particularly vulnerable. Floodwaters in the West and Midlands still remain critically high.

Meanwhile, flood water levels in the Shannon basin in counties Galway and Offaly are still a serious concern.

One of the worst-hit areas is between Meelick and Clonfert where a number of families have been forced to leave their homes.

Efforts are also continuing to prevent the Emmanual House of Prayer in Clonfert from being flooded.

There has been some flooding in Athy, Clane, Naas and Newbridge in Co Kildare along the rivers Barrow and Liffey.

A spokesman for Kildare County Council said the Army, Dublin Civil Defence and the Fire Service are helping the council to distribute sandbags.

A nursing home has been evacuated, and several houses and apartments at The Waterways in Sallins have been flooded.

The spokesman said it was not clear how far the level of the Liffey would rise this afternoon, but the weather forcast was for rain to subside later today.

He said the M4 near Maynooth and Kilcock might have to be closed, many minor roads are impassable and people should avoid travelling unless necessary.

No change in water release at Parteen Weir

The ESB has said there will be no increase today in the volume of water being released from Parteen Weir into the River Shannon, following a 3cm drop in water levels in Lough Derg.

The company said flood levels downstream of Parteen Weir are not expected to change.

ESB has been releasing water from the Parteen Weir at the same rate over the past three days. 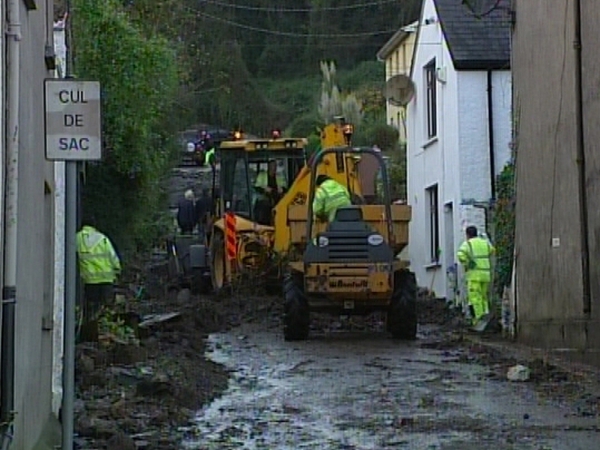