A replay of the controversial World Cup play-off match between France and the Republic of Ireland is out of the question, the French Football Federation insisted.

The Football Association of Ireland had called on the French Football Federation to join it and request a replay of the controversial world cup play off from FIFA.

In a statement the FAI had said a replay would protect the integrity of the game worldwide.

The FAI Board of Management met today to consider its position.

Earlier, Republic of Ireland captain Robbie Keane has welcomed Thierry Henry's assertion that a replay of the World Cup play-off would be the fairest option.

The two players' comments come in the wake of the Republic's World Cup exit in Paris on Wednesday.

The game ended 1-1, with France progressing 2-1 on aggregate, after Henry handled the ball twice in the build-up to William Gallas' equaliser.

Henry said earlier: 'Of course the fairest solution would be to replay the game but it is not in my control.

'Naturally I feel embarrassed at the way that we won and feel extremely sorry for the Irish who definitely deserve to be in South Africa.'

Keane reacted by saying, 'As captain of the French team, to make such a statement took courage and honour, and all of us recognise that.

'As captain of the Republic of Ireland team, I would also be happy for a replay to happen in the interest of fair play so that whichever team qualifies, can do so with their heads held high.

'We can only hope that the French Football Federation might accept the wishes of both captains in the best interests of the game.'

The chances of a replay look slim, however, as FIFA has categorically ruled out the possibility of a rematch.

In a reply to a request by the Football Association of Ireland, football's world governing body said the result of the World Cup qualifier cannot be changed and the match cannot be replayed.

'As is clearly mentioned in the Laws of the Game, during matches, decisions are taken by the referee and these decisions are final.'

The FAI had formally requested a replay after Thierry Henry's clear handball in the build-up to William Gallas' decisive goal in Paris on Wednesday night.

Swedish referee Martin Hansson failed to see the handball and insisted to Irish players that Henry had controlled the ball with his chest.

The first match report on the FIFA website yesterday failed to mention Henry's handball, but later a sentence was added giving more detail on the incident.

France coach Raymond Domenech has admitted that his side qualified for next year's World Cup thanks to a refereeing error but dismissed claims of cheating and does not feel compelled to apologise.

Domenech said: 'On the pitch, I didn't see the handball. I have since looked at the footage and it is indeed a refereeing mistake.

'For me, it's a game incident and not cheating. Therefore, I don't see why we are asked to apologise.'

There was further agony for hundreds of Irish fans yesterday as their flight from Charles de Gaulle airport in Paris was delayed by six hours following a technical fault with an Aer Lingus plane.

A small number of supporters gathered at the French Embassy in Dublin this afternoon to protest at the FIFA decision.

The demonstration was organised by fans communicating via Internet social networking sites.

Minister for Justice Dermot Ahern has said the decision by FIFA not to replay the game is hypocritical because it did announce a replay before.

Minister Ahern described the decision as a shame, but said the shame is on FIFA, not on Ireland. He said he thinks the country will come out of this with 'our head held high'.

However, former Ireland captain Roy Keane has criticised the attempts to get game replayed.

Keane said: 'They can complain all they want but France are going to the World Cup. Get over it.

'France were there for the taking and Ireland didn't do it. Same old story.

'If I'd been there in the dressing room after the game, I wouldn't be talking about the handball. I'd focus on why the defenders didn't clear it. They should've cleared it.

'I'd be more annoyed with my defenders and my goalkeeper than Thierry Henry. How can you let the ball bounce in your six-yard box?

'How can you let Thierry Henry get goal-side of you? If the ball goes into the six-yard box, where the hell is my goalkeeper? These are skills and lessons you learn as a schoolboy.

'Ireland had their chances in the two games and they never took them.' 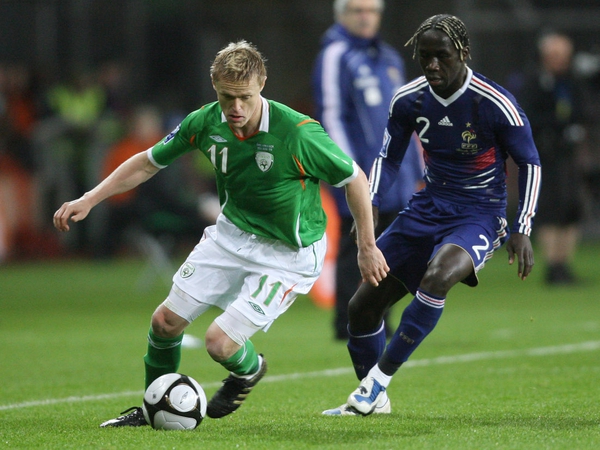