Nearly a quarter of adults would consider voting for the far-right British National Party, a poll out today suggests, after its leader made a controversial appearance on a BBC show.

The debate over whether Mr Griffin should have been allowed on the programme -- plus the fall-out from the show -- has triggered heated debate in the UK and dominated newspaper headlines.

Many critics of Mr Griffin's appearance feared that giving him such a platform would hand a boost to the far right.

The poll found 4% said they would ‘definitely’ consider voting for the BNP, a further 3% who would ‘probably’ consider it, plus 1% who said they were ‘possible’ BNP voters.

More than half of those surveyed agreed with the BNP or thought the party ‘had a point’ in wishing to ‘speak up for the interests of the indigenous, white British people... which successive governments have done far too little to protect’.

This included 43% who agreed that they had ‘no sympathy for the party itself’, though they shared some of its concerns.

Some 12% said they completely agreed with the BNP, against 38% who said they disagreed totally with the party's politics.

The BNP claimed on its website that 9,000 people had either signed up as ‘registered potential members or on our mailing lists’ since the show aired.

Cabinet minister Peter Hain, a veteran anti-apartheid campaigner who fought unsuccessfully to try to stop Mr Griffin's appearance, said: ‘This is exactly what I feared and warned about.

‘The BBC has handed the BNP the gift of the century on a plate and now we see the consequences. I'm very angry about this.’

The BBC invited him on after his party won nearly a million votes -- and a 6.2% share -- in the European Parliament elections in June, which saw Mr Griffin and a colleague voted in.

The British Broadcasting Corporation has defended the decision, saying it was duty bound to be impartial.

The BBC said it had received more than 350 complaints about the show, most of which alleged bias against the BNP. 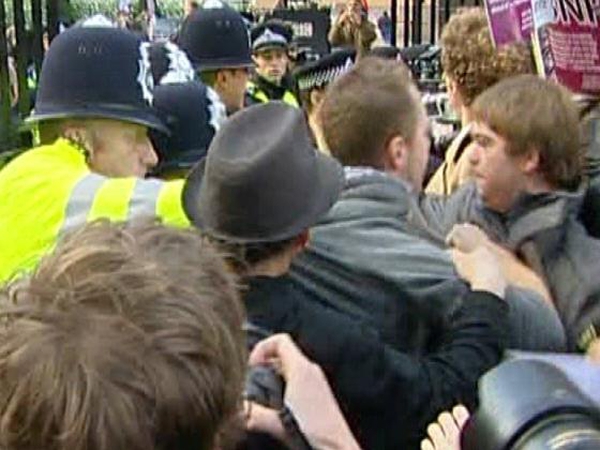