Relatives of victims of IRA terrorism in the UK have stepped up calls for compensation from Libya following the release of the Lockerbie bomber.

The families want Libya to publicly recognise the pain it inflicted through its support for terrorism and believe that Abdelbaset Ali al-Megrahi's return to Tripoli will help their cause.

Libya supplied weapons and explosives to the IRA during the Troubles.

Colin Parry, whose 12-year-old son Tim was killed in the IRA attack in Warrington in 1993, said the release of Megrahi should be reciprocated by Libya with an acknowledgement of past wrongs.

He said: 'We see Libya rejoicing over the return of al-Megrahi and the Scottish government was, in my opinion, right to show compassion to a dying man.

'But I think it's now time for Libya to acknowledge the pain and suffering they inflicted by supporting the IRA and show the same compassion to its victims.'

Mr Parry also called on the British government to back the families' court bid against Muammar Gaddafi.

He added: 'A moment in time has arisen with the release of Megrahi for Libya to address the actions of the past, especially as it aspires to be a respected nation in the eyes of the world.'

He said an apology would not be enough and called on the Libyan leader to accept the compensation claim.

Mr Donaldson is hoping to travel to Libya with some of the relatives in the autumn.

Megrahi, who is dying from prostate cancer, was controversially released on compassionate grounds from a Scottish prison last week.

Meanwhile, British Prime Minister Gordon Brown has said he was 'angry and repulsed' by the rapturous reception given to Megrahi on his return to Tripoli last week.

Mr Brown had not previously commented on Scottish authorities' decision to release the Lockerbie bomber.

Gordon Brown said he made clear last month to Libya's leader that Britain had no control over decision-making regarding the release of Megrahi, which was a matter for Scottish authorities.

Britain has denied wanting Megrahi to be freed to ease diplomatic and commercial ties with Libya, which has the biggest oil reserves in Africa. 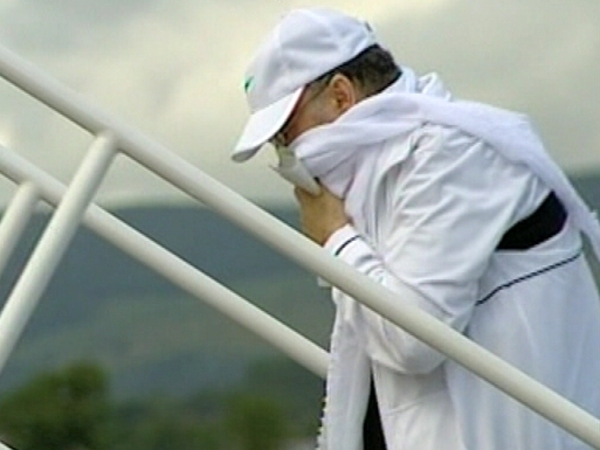 Lockerbie bomber arrives back in Libya