Chinese authorities have imposed a curfew on the capital of the Xinjiang region, Urumqi, in an attempt to quell ethnic violence.

Riot police earlier fired tear gas to try to break up rock-throwing Han and Uighur protestors in the city.

Many of the Uighur protestors were women waving the identity cards of husbands, brothers or sons they say were arbitrarily seized in a sweeping reaction to Sunday's rioting.

The violence may have been sparked by a row in a toy factory in Guangdong in southern China last month that left two Uighurs dead.

An Internet rumour posted by a disgruntled former worker alleged that six factory workers from Xinjiang had raped two girls.

The factory had recruited 800 migrant workers from Xinjiang over the previous two months and violence on 25 June at the Xuri factory resulted in 118 people being injured, 14 of them seriously.

Human rights groups have warned that a harsh crackdown on Uighurs in the wake of Sunday's violence could merely exacerbate the grievances that fuelled ethnic tensions.

Some Xinjiang newspapers carried graphic pictures of the violence, including corpses, at least one of which showed a woman whose throat had been slashed.

Despite heightened security, some unrest appears to be spreading in the volatile region, where long-standing ethnic tensions periodically erupt into bloodshed.

Almost half of Xinjiang's 20 million people are Uighurs, while the population of Urumqi, which lies around 3,300km west of Beijing, is mostly Han.

Along with Tibet, Xinjiang is one of the most politically sensitive regions in China.

The region has long been a hotbed of ethnic tensions, fostered by a yawning economic gap between Uighurs and Han Chinese, government controls on religion and culture and an influx of Han Chinese migrants who now are the majority in most key cities.

Beijing has poured cash into exploiting Xinjiang's rich oil and gas deposits and consolidating its hold on a strategically vital frontierland that borders Pakistan, Afghanistan and Central Asia, but Uighurs say migrant Han are the main beneficiaries.

Elsewhere, the Chinese embassy in the Netherlands was attacked by exiled pro-Uighur activists who smashed windows. 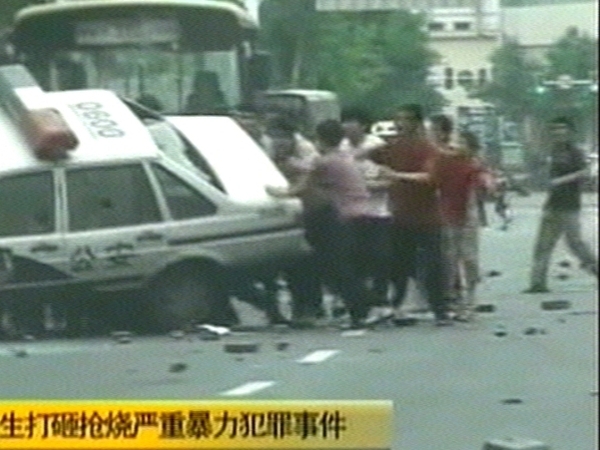 156 dead in riots in western China