Taoiseach Brian Cowen has welcomed reports that loyalist paramilitary organisations have begun to decommission their weapons.

Speaking to RTÉ News, he stressed the need to wait for the official report from the international decommissioning body.

'I know that work has been ongoing with loyalist paramilitary organisations for many months.'

An official announcement from the Independent International Commission on Decommissioning was not expected for several weeks.

But with so many parties involved, a leak was inevitable.

First Minister Peter Robinson said: 'The [DUP] would certainly welcome any move by the organisations to decommission their weapons and cease from their paramilitary activity, however, we do not want to pre-empt the outcome of this process.

'The party will continue to engage with these organisations in order to impress upon them the need to leave violence and criminality behind and to complete the decommissioning process.'

Getting loyalist paramilitaries to give up their guns has been one of the most significant challenges of Northern Ireland's still evolving peace process.

Loyalists are not significant political players and this factor has made persuading them to renounce violence all the more difficult.

However, for the best part of two years considerable effort has gone on behind the scenes to cajole and pressure the loyalists to decommission.

General John de Chastelain, the Canadian who oversaw IRA decommissioning, was in Belfast last month. During that time the two main loyalist paramilitary organisations, the UVF and the UDA, put weapons beyond use.

They have not yet decommissioned all their weapons, but are expected to continue with the process.

He said: 'More guns are off the streets as a result of the decision by both the UDA, as I understand it, and the UVF.'

He said their decision to decommission finally had not come as a surprise and that legislation that Northern Ireland Secretary Shaun Woodward introduced earlier this year, giving the loyalists until August to decommission, had helped.

Mr Orde said: 'I think the legislation put an additional pressure on these groups and they had to make a decision.

'They have made that leap in what has been a very challenging week for Northern Ireland.' 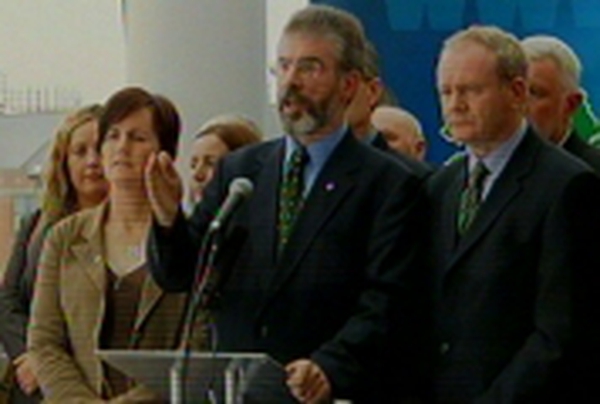