The leader of the Green Party has said the programme for Government with Fianna Fail needs to be renegotiated in the light of the collapse of the economy.

Mr Gormley said the Government had to re-examine its priorities given the economic downturn.

Earlier the party's chairman Dan Boyle has said it was time for the party to rethink the programme for Government agreed with Fianna Fáil.

In a statement Senator Boyle said the deal should be reviewed in the period after the June elections.

Senator Boyle said that it was now clear that the conduct and performance of the Goverment would be the issues that would dominate the local and European elections.

He said there were too many unresolved issues, policy errors that not been admitted and areas where responsibilty had not been taken.

A number of Government policies had been disastrous, including the light touch regulation of the financial sector and excessive salary arrangements in many areas including political life, he said.

These policies had not been Green Party policies but the mistakes needed to be confronted, according to Senator Boyle.

He believes however there is a need for the Green agenda to be extended across Government.

Everything had changed utterly since the programme for Government had been agreed, and it was a document now in need of review.

The remarks from the Green chairman represents a further distancing from Fianna Fáil as that party's ratings continue to plummet and is bound to be interepreted by some as a sign that the Greens are beginning to think in terms of an exit strategy.

Meanwhile, the deadline for candidates seeking election to local authorities to submit their nomination papers passed at noon today.

Election day is 5 June when the local elections will take place and voters will also choose their preferred European Parliament candidates.

Two bye-elections are also taking place in Dublin South and in Dublin Central.

Candidates seeking seats on city and county councils and other local authorities had until midday today to lodge their nomination papers which will be checked by 34 returning officers in the various constituencies.

These elections are held every five years with more than three million people entitled to exercise their mandate.

Nominations for the European Parliament elections closed at midday on Monday.

A total of 44 candidates are seeking 12 seats in the four constituencies in that election.

Both Fianna Fáil and Fine Gael are in danger of losing an MEP, according to a tns/MRBI poll of the four European constituencies.

The poll in today's Irish Times shows that the Labour Party could gain from Fine Gael in the East, while Fianna Fáil is in a tight fight with Sinn Féin for the last seat in Dublin.

Fine Gael Leader Enda Kenny has admitted that the party could face difficulty holding onto their five MEP seats in the European elections.

He said the party would be examining the vote management challenge between the party's candidates Mairead McGuiness and John Paul Phelan in the East Constituency.

Reacting to the latest Irish Times opinion poll Mr Kenny said it shows the party topping the poll in three of the four constituencies and that the European elections are different than the other elections because individual personalities who have been around for a while can make an impact.

He added that the European elections are all about name recognition and personality but that he remains confident of holding their two seats in the East Constituency.

Meanwhile Taoiseach Brian Cowen, speaking on the campaign trail in Bray, said that morale within the party is good despite the opinion polls.

He said Fianna Fáil has a good track record at local and European level.

The Taoiseach said with today's opinion poll showing the possibilty of Eoin Ryan losing his European seat Mr Cowen said he remains confident that Mr Ryan will be successful on election day. 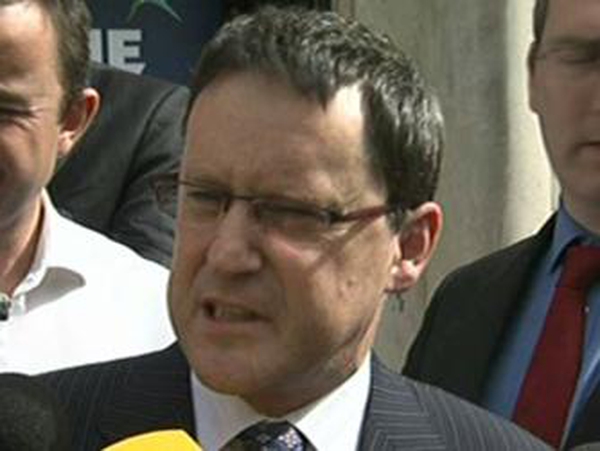