An Irish person has been implicated in an assassination plot against the Bolivian president, which was thwarted by security forces.

Police chief Victor Hugo Escobar said three people, who were believed to be part of a conspiracy to kill Evo Morales, were killed in a half-hour shootout at a hotel in the eastern Bolivian city of Santa Cruz, an opposition stronghold.

Mr Morales, a socialist, is Bolivia's first indigenous president and has faced strong opposition in relatively wealthy regions of the country, including Santa Cruz.

The president was not in Santa Cruz at the time of the incident shortly after midnight local time.

Speaking later during a visit to Venezuela, Mr Morales said an Irish person may have been among what he called foreign mercenaries involved in the suspected plot.

Government officials said authorities had recently been following the suspects.

‘Yesterday I gave instructions to the vice president to move to arrest these mercenaries and this morning I was informed of a half-hour shootout at a hotel in the city of Santa Cruz,’ Mr Morales said, adding two people were under arrest.

There was confusion regarding the nationalities of the foreigners killed.

While the chief of police said two of those killed were from Hungary, several local media organizations reported they were from Romania and Ireland.

In La Paz, Bolivian Vice President Alvaro Garcia told reporters the men were carrying guns and grenades and attacked police as they approached them.

He said that after the shootout, police found documents ‘about preparations for an assassination, an attempt on the lives of the president and the vice president.’

Heavily armed police cordoned off the hotel where the shootout occurred.

President Morales has announced several plots against him in the past but the results of investigations have never been released, causing some Bolivians to doubt their veracity. 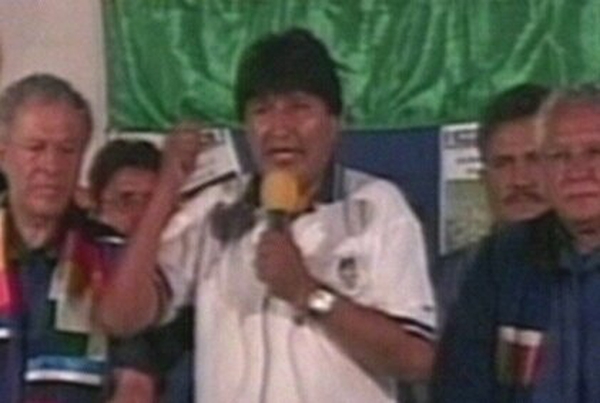