The Fine Gael leader, Enda Kenny has said the economy could be revived within five years if public life were fundamentally reformed.

Mr Kenny told delegates at his party's 75th Ard Fheis that Fine Gael was the only party that could guarantee political change.

In his keynote address Mr Kenny said his party in government would create 100,000 new jobs by the end of 2013 and restore Ireland to the top five most competitive countries in the world within three years.

Fine Gael has been enjoying both its high poll rating and the luxury of watching from the sidelines as the Government grapples with the recession.

Some 4,000 of the party faithful heard their leader pledge to fix the public finances by 2012 without raising the standard and top rate of income tax.

But Mr Kenny left the door open for other tax hikes.

Last week, Fine Gael said they would impose another levy on top earners as well as abolishing the PRSI exemption on the low paid and getting rid of the ceiling contributions.

The party leader told delegates that jobs will be the priority and one plan is to abolish employers’ PRSI for every new job created.

He also ruled out support for the reintroduction of 3rd level fees and promised to abolish the current registration fee system.

Mr Kenny said that one his first acts as taoiseach will be to reduce the number of junior ministers from 20 down to 12, telling delegates that the country could not afford 20 junior ministers.

Mr Kenny also criticised Fianna Fáil saying they had were unable to lead and had lost touch with the people.

The next big test for the party will be the local and European elections in June when they hope their message will lead to strong gains.

Fine Gael's finance spokesman Richard Bruton has said that taxpayers must not be burdened with banks' toxic property loans.

On the second day of the Ard Fheis, Mr Bruton also said the country cannot tax its way out of recession.

Richard Burton told delegates that tax hikes alone are not the solution to plugging the gap in the public finances.

On the banks, Mr Bruton said they had abused the trust of the people and could not expect the taxpayer would always bail them out while they walk away unscathed.

The Fine Gael Ard Fheis resumed at the Citywest Hotel in Dublin this morning, with the main focus on plans for job creation and retention.

The party says the creation and retention of jobs is the only way to get the public finances out of the current crisis.

Dr Reilly pointed the finger at the Government for setting up the HSE, which he said was as a bureaucratic monster that eats money.

He said the Government had focused on cancelling services rather than cutting waste.

Dr O'Reilly said his party would introduce universal health insurance if it was in power.

The party's social and family affairs spokeswoman Olwyn Enright urged the Government to remove barriers on the unemployed from retraining or setting up their own business.

MEP Gay Mitchell accused the Government of spending the people's heritage. Mr Mitchell said it was time that a fresh Government was put in place to deal with the financial crisis.

Paul Connaughton said the Government had insulted the elderly by taking back medical cards from the over 70s.

He also criticised the Government's plan for funding nursing home care, which is known as the fair deal.

He said that the absence of a cap on the valuation on land was a huge source of annoyance and worry to farm families.

David Stanton said that carers have been put on the backburner by the Government following its decision not to publish a national carers' strategy.

Last night, the party dealt with international affairs and heard strong support for the Lisbon Treaty.

The party’s education spokesperson Brian Hayes has said the Minister for Education must reverse the recent cuts to special education provision and should cap the rent paid to 26 providers of prefabs to schools here.

Deputy Hayes said it is scandalous that we will pay €50 million on prefab rental for schools this year.

He said waste and duplication in the education system must be cut out.

He also said Fine Gael will oppose the reintroduction of third level fees and that his party's proposal is that graduates pay toward the cost of their course when they begin working.

For more information on coverage of the Ard Fheis click here 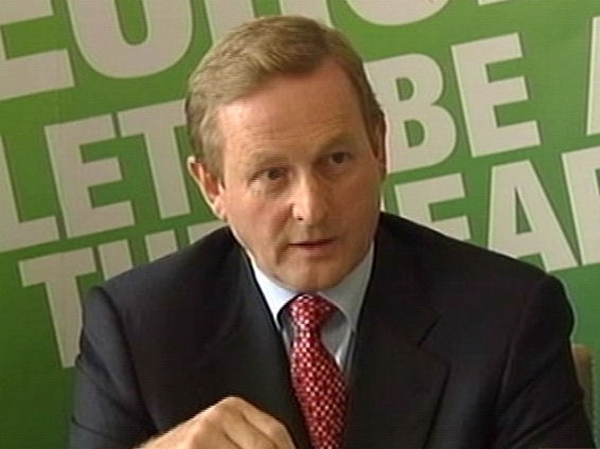