Around 18,000 supporters turned out to welcome Ireland's rugby squad home after their historic Six Nations win.

A civic reception for the team was held outside the Mansion House in Dublin.

Watch highlights of the ceremony

Team captain Brian O'Driscoll was almost drowned out by screams and chants of 'Ole Ole' from the massive crowd.

‘It's been fantastic, it's taken a while to settle in,’ he said.

He said the dramatic end to the game meant it took a little longer to deal with what the team had achieved.

‘It's a fantastic feeling, waking up this morning you were not as sore as you would have been if you had lost’.

Coach Declan Kidney said the team had got what they rightly deserved.

'I think the honesty and the support of the players shone through yesterday and I think they got their just reward,' he said.

The reception was attended by the Taoiseach Brian Cowen and Dublin's Deputy Lord Mayor Emer Costelloe.

Earlier in the day, the management and team were met by an estimated 2,000 fans upon their arrival at Dublin Airport.

Declan Kidney's men sealed the clean sweep after narrowly beating Wales in a nail-biting match that ended 17-15, the first Grand Slam in 61 years.

Celebrations erupted across the country last night as revellers toasted the memorable win.

Last night Taoiseach Brian Cowen led the tributes to the squad saying their achievements were nothing short of superb.

Mr Cowen said the triumph would go down in the history books as one of Ireland's greatest sporting victories.

Sports Minister Martin Cullen described the win as a magnificent occasion, while Enda Kenny, leader of Fine Gael, said the team had made the entire country proud.

Most of those watching at Cardiff's Millennium Stadium had not been born when Ireland won their only previous grand slam in 1948.

For more on this story, check out our full coverage at RTÉ.ie/Sport 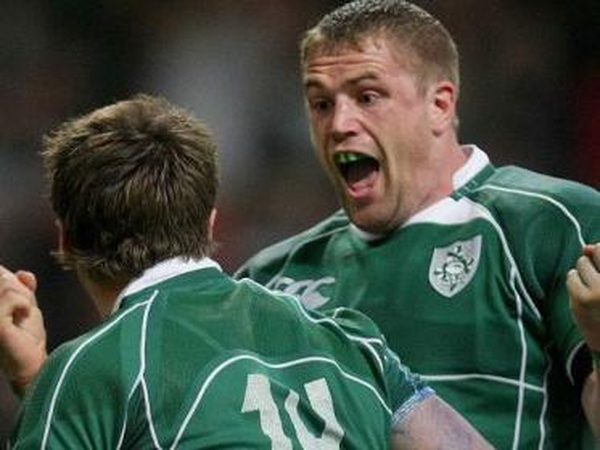