Taoiseach Brian Cowen has announced the imposition of a pension levy on all public servants, as the main plank in the Government's recovery plan for the current year.

How the Govt recovery plan will affect you

The Taoiseach told the Dáil the Government had decided on a recovery strategy in the absence of agreement with the social partners.

In the news conference that followed, Mr Cowen said he recognised that the Government's decision was unpalatable and not immediately welcome.

The Taoiseach said the move was the necessary way of doing what had to be done this year.

The bulk of the required €2bn saving, €1.4bn, is to come from a pension related levy on all public servants, including local authority employees.

The pension levy rates are as follows:

A person earning €15,000 gross would pay a pension levy of 3% and the levy rises gradually thereafter.

Pay increases agreed under the partnership process last year,and due for public servants in September this year, with a second phase in 2010, will not now be paid on the dates planned.

Mr Cowen also outlined a list of other reductions in spending.

There is to be a cut of €95m in overseas aid, and €80m is to be saved by a reduction in all professional fees.

Mr Cowen said there would also be a reduction in the early childcare supplement, from €1,100 to €1,000 a year and by restricting it to children under five, saving the State €75m.

He said there would be a saving of €140m in general administration and in savings on defence equipment.

And there is to be a €300m saving in the €8.2bn capital programme, as the State is getting better prices on some projects.

And he said there was to be a reprioritisation of €150m, on school buildings and energy efficiency improvements.

His statement was followed by responses from the Opposition.

Fine Gael leader Enda Kenny called the government cuts a €2bn sticking plaster designed to cover a gaping wound that has not been treated by government.

He said the Opposition would support the Government in making savings if it considered Fine Gael proposals on tax, job creation measures, public service reform and cutting the public pay bill.

Deputy Kenny claimed his party was gone beyond the stage of 'point scoring' and that the situation was too serious to engage in political crossfire.

The Fine Gael leader said the Taoiseach's speech was a unique moment in Dáil history as it was the first time a plan had been put before the chamber that was already rejected by the social partners.

Labour Leader Eamon Gilmore said the Taoiseach's plan has added to the uncertainty, confusion and difficulty of the current situation.

He said Brian Cowen has not shown leadership, has failed to provide a roadmap forward and that his statement was a big disappointment that will add more to the uncertainty and the climate of despair that people feel.

Concern has said it is shocked by the €95m reduction in Overseas Development Aid announced by the Taoiseach.

Connell Foley, spokesperson for the humanitarian organisation, said that taking account of earlier reductions last year, aid had been cut by a total of 17% or €155m.

He said this moved us away from the official target of donating 0.7% of Gross National Product by 2012 and that in the past year aid from Ireland had shrunk from 0.56% to 0.53% of GNP.

Oxfam reacted with dismay to the announcement. It said it was highly disappointing that the Government had targeted the assistance to desperately poor people for disproportionate cuts.

Opposition parties earlier demanded a full debate on the Government's economic proposals in the Dáil today, rather than the series of statements proposed by the Taoiseach.

However, Mr Cowen said there would be an opportunity for a full debate tomorrow, and that his proposal for statements starting at 4pm would allow the Opposition to put their views.

The Opposition called a Dáil vote on the matter.

The Government won the vote on the format of today's Dáil proceedings by 75 votes to 66. 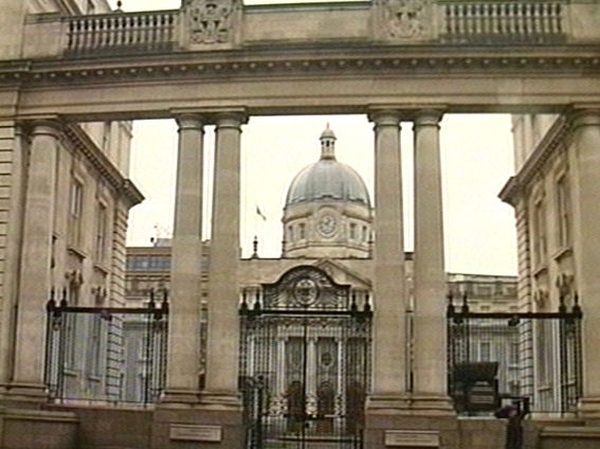