A blanket of snow has covered large parts of western Europe after some of the heaviest falls in two decades.

The snow has been causing major flight cancellations, disrupting public transport and misery on the roads.

London was covered in up to 10cm of snow, the highest recorded in 18 years, closing the world's busiest airport at Heathrow, paralysing train and bus services and forcing many commuters to stay at home.

Flurries also brought chaos to parts of Paris and Spain, while three people died in Italy amid adverse weather conditions as the snow reached northern Morocco.

The snow caused a Cyprus Airways plane to come off the taxiway at Heathrow this morning before the airport was then shutdown.

'The plane had safely landed and was making its way to the stand and the front wheel went on to the grass area,' a spokeswoman for airport operator BAA said. Passengers were bussed to the terminal and there were no injuries.

Both runways were closed at the world's biggest international airport for a time.

The British Met Office issued a severe weather warning for London and the southeast of England, while train and London Underground services have also been badly hit.

An army of snow ploughs and gritters were working to clear roads as a spokesman for the Highways Agency said: 'If your journey is not essential I would strongly advise you don't make it.'

Hundreds of schools in southeast England have also been shut.

'It's absolute madness going in to work, but at least I can say I tried,' said Bree McWilliam, a policy analyst from Brisbane who experienced her first ever snowfall as she struggled into work.

In France, flights were delayed by an average of an hour in Paris's Orly and Roissy-Charles de Gaulle airports. One of Orly's two runways was closed, and the other opened two hours late.

Air France cancelled around 30 short and medium haul flights from Charles de Gaulle between 7am and 10am, but said long haul routes had not been troubled.

France's road traffic agency urged motorists to cancel non-essential journeys, with roads difficult and in a small number of some cases impassable around Paris and in the east near Strasbourg.

The snow and icy conditions caused a dozen accidents in the Paris region without causing injuries, officials said.

In Italy, three people died and 500 people had to be evacuated from their homes yesterday amid bad weather in parts of the country, while Milan woke up today to a dusting of snow.

Up to 20cm also fell in parts of Switzerland overnight while part of the road around the San Bernardino tunnel was closed.

1-3cm of snow fell in Belgium, where around 400km of traffic jams accumulated during the morning peak hour.

'The rain and snow that have been forecast are going to turn our roads into ice rinks,' Belgium's touring automobile association said.

A storm disrupted ferry travel from the port city of Algeciras to Morocco, authorities said, and parts of central and southwestern Spain reported traffic disruptions before returning to normal in most areas by mid-afternoon.

Both Spain and France were hit by violent storms late last month that killed 25 people and left hundreds of thousands of homes without power. 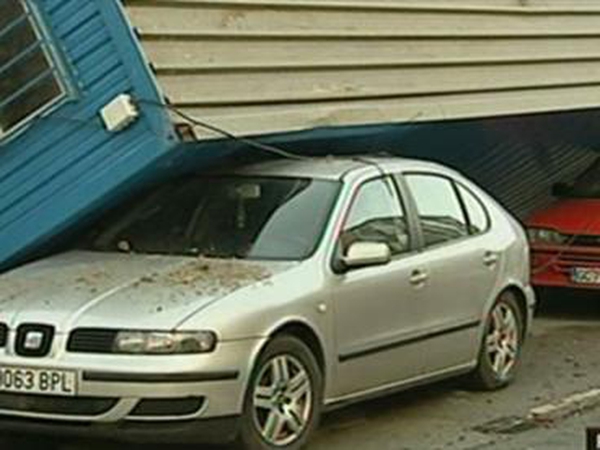