A framework document outlining the Government's key areas for discussion on stabilising the national finances will be circulated to all the social partners tomorrow.

However, the document is not expected to contain specific Government proposals for saving money - but list with headings for consideration.

Talks between Government officials and union representatives on the draft framework document have adjourned for the night.

The original document circulated earlier to employers and unions was described by a number of sources as very vague - and after tonight's discussions, ICTU General Secretary David Begg said they needed something more precise and time related.

Meanwhile, the Department of Finance has confirmed that on the basis of the €20bn deficit forecast for this year, the Government is now borrowing €55m a day.

If they achieved the €2bn in cost savings for this year, that figure could be reduced to €50 m a day - with resulting savings in interest costs.

The original deadline for agreeing a national recovery plan was the end of the month, which is Saturday.

However, Government sources said that if the talks were proceeding well on the basis of consensus, that deadline might be extended.

Elsewhere, a five-hour meeting of the Fianna Fáil parliamentary party ended this evening with TDs and Senators expressing strong support for the Government's approach to the economic crisis.

But there was opposition to the suggestion of an extra tax on second homes.

Later the Government Chief Whip said the prospect of pay cuts for Oireachtas members was now on the agenda.

It was the longest parliamentary party meeting of recent times with over 40 Fianna Fáil TDs, Senators and MEPs contributing to a deliberately open-ended session;

Taoiseach Brian Cowen opened proceedings with a warning that the country faced €15bn in cutbacks over the next five years putting the €2bn sought in 2009 in stark context.

As they rose to speak some members were critical of the Government's failure to get its message across - some wanted Mr Cowen to make a state of the nation address to spell it out.

There was opposition to the notion of an extra tax on second homes because some argued it would create additional hardship for people who had made investments as part of their pension arrangements.

Afterwards TDs said the meeting had been positive even though some said it had been short of details and specifics.

Government Chief Whip Pat Carey said discussions had been realistic, and confirmed that pay cuts for Oireachtas members was now firmly on the menu of cost saving options.

Earlier, the Irish Congress of Trade Unions rejected last Friday's request by employers to defer payment of the national wage increases for a year.

After a two-hour meeting of the Executive Council this afternoon, General Secretary David Begg said that the national agreement had sufficient mechanisms to assist firms that could not afford to pay - and there was no sign that those mechanisms had failed.

He described IBEC seeking a blanket deferral of the agreement without sufficient grounds as opportunistic.

He said it was up to IBEC to decide whether they wanted to remain as part of the framework of the national agreement. He said that if they did not, it would obviously complicate matters quite a lot.

He said the Government would not be able to reach agreement with unions within the framework of Towards 2016 if other parties were departing the scene as quickly as they could.

He said people would have to make up their minds whether they were out to get the country on its feet again or they are not.

At today's talks on a national recovery plan, the €20bn public sector pay bill was predicted to dominate discussions.

While agreement is not expected to emerge until later this week at the earliest, sources say public servants' core pay will not be cut.

However, alternative proposals include a levy averaging 5% to contribute to their guaranteed pensions.

Other non-core pay elements that may face cuts include allowances, increments and overtime.

Further savings are also being sought in public service delivery and infrastructure projects.

But unions are determined their members will not carry the burden alone.

Their proposals include a new 48% tax rate for high earners, a national recovery bond and a property tax on second homes - alluded to by Minister Dermot Ahern last night.

The Impact trade union said the pace of talks at Government buildings is doing the partnership process no good.

Impact’s Peter McLoone said the overview of the economy has been given by Government, but specific measures people will have to take have not been put forward.

He said there needs to be recognition that everyone will play a part.

He said any contacts with Government over the weekend were informal, Mr McLoone added that the process to date had been blunt and direct in terms of setting out what is needed.

He said that the move by IBEC on Friday was sidetracking and would not help provide solutions; he said the call to defer the national wage agreement was a stunt.

Other firm taxation decisions may depend on the outcome of the Commission on Taxation later this year. 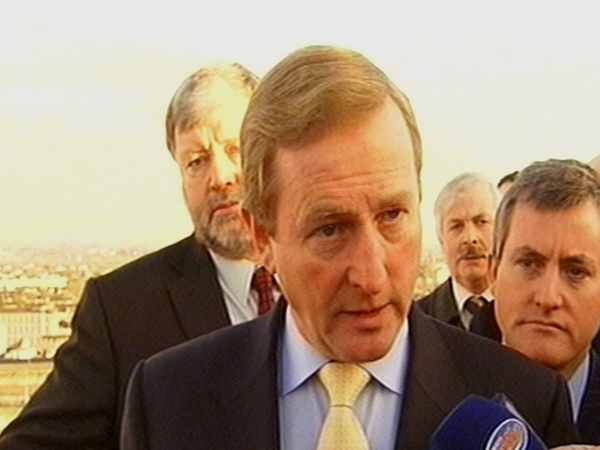