US President Barack Obama has taken the oath of office a second time after a word was out of sequence when he was sworn in on Tuesday.

Chief Justice John Roberts, who first administered the oath to Mr Obama on Tuesday on the steps of the US Capitol, administered it again last night in front of reporters and a few members of the president's staff.

'We believe that the oath of office was administered effectively and that the president was sworn in appropriately yesterday,' Press Secretary Robert Gibbs told a hastily gathered group of journalists, quoting a statement from White House counsel Greg Craig.

'But the oath appears in the Constitution itself and, out of an abundance of caution, because there was one word out of sequence, Chief Justice John Roberts will administer the oath a second time.'

Then Mr Gibbs ushered reporters into the Map Room, where Mr Obama was waiting, smiling, along with the chief justice. Mr Obama spoke with journalists and then stood next to Mr Roberts and took the oath again.

Mr Obama, who briefly interrupted the chief justice by starting the oath before Mr Roberts finished reciting the first part, then repeated back the line as Mr Roberts had said it.

Yesterday, Mr Obama joked with reporters about wanting to do it again. 'We decided, you know, that it was so much fun!' he said.

Then Mr Roberts asked him if he was ready to take the oath. 'I am. We're going to do it very slowly,' Mr Obama said.

'Congratulations again,' the chief justice said after they were finished. 'Thank you sir,' Mr Obama replied as staff members applauded.

President Obama has named his special envoys for the Middle East and the Afghanistan-Pakistan region.

George Mitchell, the former US special envoy to Northern Ireland, will now travel to the Middle East to try to jumpstart the moribund Arab-Israeli peace talks.

Mr Obama has chosen former ambassador to the UN Richard Holbrooke as a special envoy for Afghanistan, Pakistan and related issues.

The US Senate last night approved the appointment of Senator Hillary Clinton as Secretary of State.

The 94-2 vote was expected, despite concerns expressed by senators that there was a potential conflict of interest with former president Bill Clinton's international fundraising work.

Ms Clinton was sworn in to her new office within hours of the vote.

The oath of office was administered by Judge Kathleen Oberly, of the Washington DC Court of Appeals, a childhood friend of Mrs Clinton.

The US Senate's finance committee has approved Timothy Geithner's nomination to serve as Treasury secretary despite criticism over his personal tax affairs.

The committee voted 18-5 for Mr Geithner, and Senate Majority Leader Harry Reid has said he will bring the nomination to a vote by the full chamber as quickly as possible.

In a separate development last night, Caroline Kennedy has withdrawn from consideration to occupy the US Senate seat vacated by Secretary of State Hillary Clinton.

'I informed (New York) Governor (David) Paterson today that for personal reasons I am withdrawing my name from consideration for the United States Senate,' said an official statement released early today.

A person close to the decision indicated that Ms Kennedy, who is the daughter of assassinated US president John F Kennedy, was withdrawing from consideration over concerns about the health of her uncle, according to the New York Times.

Senator Edward Kennedy collapsed on Tuesday during an inauguration luncheon for US President Barack Obama. He has been suffering from brain cancer.

Ms Kennedy had highlighted her record of charitable work, service on cultural boards and efforts to reform New York's education system as proof of a commitment to public service.

But she had been embarrassed by a report that she had not always voted in key elections and she got off to a rocky start with local media amid criticism over her unpolished public speaking ability.

Rivals for the seat include worthy but little-known lawmakers as well as Andrew Cuomo, himself political royalty as the son of popular former state governor Mario Cuomo.

Whoever is selected by Mr Paterson must contest election for the final two years of Ms Clinton's term in 2010. They could pursue their own six-year tenure in 2012. 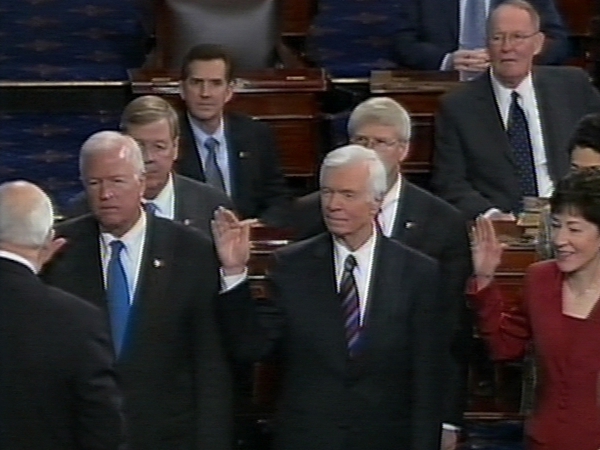