The General President of SIPTU, Jack O'Connor, has criticised Fine Gael leader Enda Kenny for suggesting that the national wage agreement should be suspended.

He said Mr Kenny's call for a 12 month pay freeze - made at the Fine Gael National Conference in Wexford last night - would further depress consumer confidence and worsen the recession.

In his address in Wexford, Mr Kenny said banks should be held accountable for what he claimed was reckless behaviour.

Enda Kenny's televised national conference speech came at a good time for Fine Gael - an opinion poll in today's Sunday Business Post shows the party up two points to 35%, five points ahead of Fianna Fáil, who have gained four points in the last month.

He used the opportunity to say the country simply cannot afford the national pay deal, and it should be suspended for 12 months.

He called on the Government and public service unions to implement a complete pay freeze for 12 months, and said private sector employers and their staff should ensure that there are no pay increases at the expense of jobs.

Mr Kenny promised that Fine Gael in government would deliver on universal healthcare, and draw a line in the sand on Government spending, strictly controlling and targetting spending.

He also repeated his opposition to involving venture capitalists in recapitalisation of the banks, saying the Govenrment should take preference shares in Irish institutions instead. 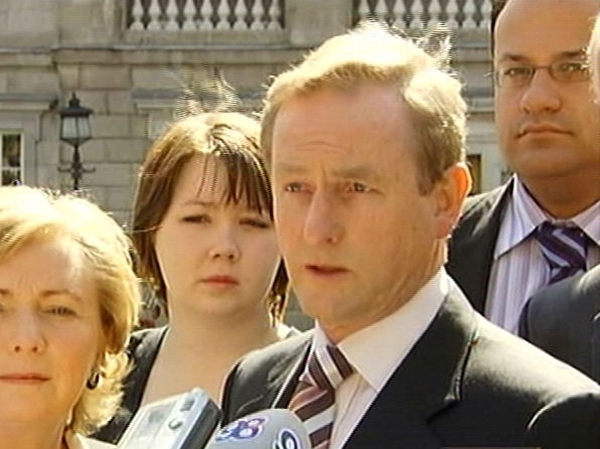