Minister for Finance Brian Lenihan has said that deposits in Irish banks are secure and that bank customers can rest confident in the knowledge that their money is safe.

Mr Lenihan said that he is prepared to review the statutory guarantee limit for bank deposits, which is currently set at €20,000.

However, he said the question of an appropriate time to make an announcement about any changes to the guarantee still has to be decided by the Government.

Mr Lenihan said that he did not believe it was helpful to speculate about the legal size of the deposit guarantee in the current circumstances because the Government wants to ensure that all deposits are safe.

The minister insisted that deposits are not in any danger and said that people should not be going to banks to shift their deposit accounts on the basis of unfounded allegations made on radio programmes.

Mr Lenihan said that the Government will take whatever steps are required to ensure the stability of the Irish banking system and that nothing would stand in his way from ensuring that stability in the present circumstances.

He added that that the Financial Regulator had confirmed that, as of today, deposits are safe.

The Minister also welcomed the decision by the Financial Regulator to ban the short selling of Irish financial stocks, which prompted a rally in bank share prices on the Dublin stock exchange this morning.

The practice of short selling or shorting has been widely criticised for hastening and even causing declines in the share prices of many stocks in recent weeks and months.

Short selling is when a speculator borrows shares in a company from another party for a particular period of time and then sells them in the hope of buying shares in the same company again for a cheaper price.

The speculator then gives back the borrowed shares making a profit in the intervening trade.

While the practice has critics, others say the falling share values have little to do with shorting, and more to do with underlying very poor sentiment because of rising bad debts and falling profits.

Meanwhile, Anglo Irish Bank is reported to be in talks which may lead to a takeover of Irish Nationwide Building Society.

The development follows concerns about how the building society could be affected by the credit crunch.

It is understood that any merger would see Irish Nationwide branches remaining open.

Management and staff at Irish Nationwide Building Society have been informed that the society has had no approach from Anglo Irish Bank in relation to a takeover.

Around 100,000 Irish Nationwide members would be eligible for a windfall in the event of a deal to compensate them for demutualising the society.

Until recent months, a figure of around €10,000 each was being mooted. However, that was before the financial crisis swept the markets and the deterioration in the economy.

Separately, Bank of Ireland has categorically denied reports that the bank is in any takeover talks or has received any approach from Spanish bank Santander or any other party.

But despite today's record gains, the ISEQ index of Irish shares is still below the 4,345 level it closed at last Friday.

Other European markets were up strongly, with the FTSE closing 9.3% higher at 5335.2, which is its biggest one-day gain.

On Wall Street, the Dow Jones has gained 4% while the Nasdaq is up 3.7% as President George W Bush today pledged that the US government was acting to shore up the nation's ailing economy.

The US government has unveiled a financial rescue package to increase confidence in the markets. The measures include buying billions of dollars of bad mortgage-related loans from American banks.

President Bush said the current economic challenges must be met with unprecedented action.

Click here for more about the deposit guarantee system 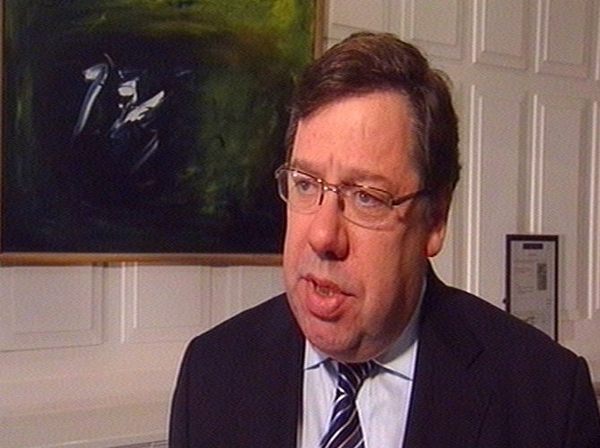