The Russian Prime Minister Vladimir Putin has said he suspects unnamed persons in the US provoked the conflict in Georgia in an attempt to help a candidate in the US presidential election.

Putin said Moscow suspected that US nationals were present in the war zone in Georgia and the Russian military produced a copy of a US passport it said had been retrieved after a bloody clash between Russian troops and Georgian special forces.

White House spokeswoman Dana Perino said Putin's allegations, made in an interview on CNN, were 'patently false' and the US State Department said it was 'ludicrous' for the Russians to say they were not responsible for what had happened in Georgia.

In extracts of the interview broadcast on Russian state television, Putin did not say who may have been involved or which of the candidates - Democrat Barack Obama or Republican John McCain - was to have been the beneficiary.

Russia is facing diplomatic isolation over its military action against Georgia.

Moscow accused the West of heightening tension by a naval build-up in the Black Sea and said talk of punishing Russia for recognising the independence of two breakaway Georgian regions was the product of a sick and confused imagination.

The so-called 'Group of Seven' nations condemned Moscow's continued occupation of Georgia, while a group of Asian allies, led by China, failed to follow Russia's lead on independence for two breakaway regions of Georgia.

The crisis flared early this month when Russia launched an overwhelming counter-attack after Georgia tried to retake by force its separatist province of South Ossetia.

Russian forces swept the Georgian army out of the rebel region and are still occupying some areas of Georgia proper. On Tuesday Moscow announced that it was recognising South Ossetia and another breakaway region, Abkhazia, as independent states.

Current EU president France has called a meeting of EU heads of government on Monday to discuss the Georgian crisis.

'Sanctions are being considered and many other means as well,' French Foreign Minister Bernard Kouchner said in response to a question at a news conference.

'We are trying to elaborate a strong text that will show our determination not to accept (what is happening in Georgia),' he said. 'Of course, there are also sanctions.'

'But that is a sick imagination, and probably that applies to sanctions as well. I think it is a demonstration of complete confusion,' Mr Lavrov told reporters in Dushanbe.

As the diplomatic manoeuvring gathered pace, Moscow also expressed alarm at a naval build-up in the Black Sea, an area normally dominated by its southern fleet.

Two US warships are already off the coast of Georgia to show support for their ally and Washington has ordered the flagship of its Sixth Fleet, the sophisticated joint command ship Mount Whitney, to the area, saying it will deliver humanitarian supplies.

'The appearance of NATO battleships here in the Black Sea basin ... and the decision to deliver humanitarian aid (to Georgia) using NATO battleships is something that can hardly be explained,' Prime Minister Vladimir Putin's chief spokesman said yesterday evening.

'Let us hope ... that we do not see any direct confrontation.'

NATO insists the only Black Sea presence under the auspices of the Western military alliance is a group of four warships - one Spanish, one German, one Polish and one American - which are on a long-planned routine exercise.

Russia's deputy chief of the General Staff, Col-General Anatoly Nogovitsyn, has spoken of up to 18 NATO vessels being in or expected in the Black Sea and attacked the use of warships to deliver aid to Georgia as devilish.

Russia's navy has responded by sending the flagship of its Black Sea fleet, the guided missile cruiser Moskva, to the Abkhaz port of Sukhumi, less than 200km to the north of where the two US warships are sailing.

On the diplomatic front, Moscow faced difficulties in winning support for its position on Abkhazia and South Ossetia, as normally reliable allies shied away from recognising the two rebel regions as independent states.

No other country has recognised the territories since Russian President Dmitry Medvedev signed a decree doing so on Tuesday. The US and European powers immediately condemned the move, saying it violated international law.

Mr Medvedev failed to secure support for his action at the Dushanbe summit of the Shanghai Cooperation Organisation, a group linking Moscow with China and four ex-Soviet Central Asian states.

'The SCO states express grave concern in connection with the recent tensions around the South Ossetian issue and urge the sides to solve existing problems peacefully, through dialogue, and to make efforts facilitating reconciliation and talks,' the summit's closing statement said.

Even China, which often sides with Russia in diplomatic disputes, issued a veiled criticism of Moscow's actions, saying it was concerned about the latest changes in South Ossetia and Abkhazia and calling for dialogue to resolve the issue. 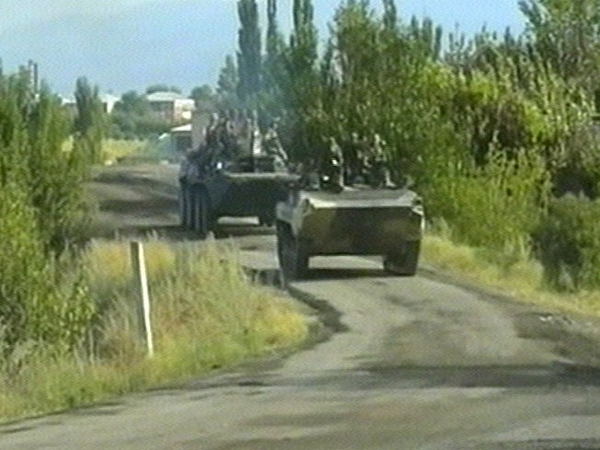 Protest in Georgia against Russian troops