He said Ukraine hoped to raise the question of increasing the cost of leasing the Sevastopol base in Ukraine's southern Crimea region to Russia's Black Sea Fleet, a renegotiation Moscow has said would break a 1997 agreement.

'We are sorry about this decision, for Ukraine it is unacceptable and therefore we cannot support this position,' Mr Yushchenko told reporters.

'(We need to) raise the question about the lease payment, and new financial conditions because those old conditions were set when there was no market for land deals,' he said.

Mr Yushchenko went on to say that Russia's recognition of the independence of two Georgian regions threatened peace and stability in neighbouring states and throughout Europe.

'The decision taken by the Russian leaders constitutes a threat for peace and stability in our region and in Europe,' he said.

During a visit to Kiev, British Foreign Secretary David Miliband urged Ukraine 'not to provide any pretext' for Russia to take action against the former Soviet republic.

French President Nicolas Sarkozy said no-one wanted another Cold War and called on Russia to pull back its forces to positions they held before the current conflict with Georgia.

The other G8 nations have condemned Russia's decision to recognise Georgia's breakaway regions of South Ossetia and Abkhazia.

'We, the foreign ministers of Canada, France, Germany, Italy, Japan, the United States and the United Kingdom, condemn the action of our fellow G8 member,' the group said in a joint statement released by the US State Department.

'We deplore Russia's excessive use of military force in Georgia and its continued occupation of parts of Georgia.'

Earlier, French Foreign Minister Bernard Kouchner warned that Russia could have its sights set on Ukraine and Moldova after recognising the Georgian separatists.

It is feared Russian troops might target the southern Ukrainian region of Crimea if President Yushchenko continues to openly support Tbilisi in the Georgia-Russia conflict.

Crimea, which is populated mostly by ethnic Russians, is home to the port of Sevastopol where Russia's Black Sea Fleet has been based since the collapse of the Soviet Union in 1991.

The Molodovan region of Transdniestr, which lies in the east of Ukraine, fought a brief independence war after the collapse of the Soviet Union but is not internationally recognised.

It currently hosts a contingent of Russian troops and a Soviet-era arms dump. 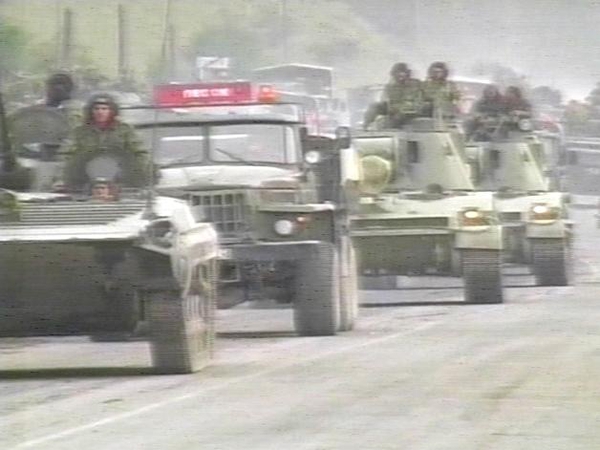