The draft includes a demand for an immediate Russian military withdrawal from Georgia.

Ambassador Vitaly Churkin told the council the resolution should incorporate and endorse a six-point peace plan promoted by French President Nicolas Sarkozy and signed by both Georgia and Russia.

Ruddia's President Dmitry Medvedev told Mr Sarkozy earlier that Russia would pull its troops in Georgia back to the positions set out in a French-brokered ceasefire agreement by 22 August.

Mr Medvedev told the French president during a telephone call that part of the peacekeepers would be pulled back to the temporary security zone.

The remaining contingent, which was used to reinforce the peacekeepers, would be pulled back to the territory of South Ossetia and to Russia, he said.

The Kremlin confirmed the content of the call in a statement this evening.

Foreign Minister Sergei Lavrov had earlier said Russian forces could pull out of Georgia in three or four days if Georgia withdrew its own troops.

Mr Lavrov said NATO's statement on the conflict in Georgia was biased and accused the Western military alliance of trying to save a 'criminal regime' in Tbilisi.

'NATO is trying to make a victim of an aggressor and whitewash a criminal regime, save a collapsing regime and is taking a path to the rearmament of the current leaders in Georgia,' he told reporters.

The NATO foreign ministers, in a joint statement, said this morning they could not continue business as usual with Russia.

NATO Secretary General Jaap de Hoop Scheffer said there were no signs of a Russian troop withdrawal from Georgia and announced the effective freezing of the NATO-Russia Council.

Almost immediately Russia's navy announced it was pulling out of a NATO exercise in the Baltic Sea and was unable to host a scheduled visit by a US naval frigate.

In Washington, the US Treasury said it would work with US allies to provide Georgia with humanitarian aid and longer-term reconstruction aid in the wake of the conflict.

Only a few ambulances and trucks carrying construction materials headed for South Ossetia from Russia, and occasional military patrols were visible on the road.

Stepping up pressure on Tbilisi, Moscow closed its land border with Georgia and neighbouring Azerbaijan to citizens who are not from the CIS, a grouping of former Soviet states. Georgia last week said it was withdrawing from the CIS.

A decree signed by Prime Minister Vladimir Putin said the move was needed to ‘prevent weapons smuggling and members of foreign terrorist organisations from entering Russia’.

Air, rail and sea links between Russia and Georgia have already been cut. The virtual blockade has hurt Georgia's economy, which depends heavily on Russia.

Russia has said its soldiers have pushed into Georgia from South Ossetia to build a security zone. The peace agreement permits Moscow to patrol a limited buffer zone between South Ossetia and Georgia proper.

Russia's envoy to NATO warned that the quality of co-operation between Moscow and the alliance would suffer if the NATO foreign ministers fail to reach a responsible decision.

'We don't want to hear that (Mikheil) Saakashvili is a saint,' he added, comparing the Georgian president's actions in the breakaway province of South Ossetia to the worst excesses of Hitler and Stalin.

Despite one senior US official's assurance that 'I think you'll see a NATO more united than you might expect,' other diplomatic sources said the subject of Russia's role in Georgia had split NATO members.

Britain, Canada, the US and most eastern European member states are in one camp seeking a tough stance on Russia's actions, the sources said.

Meanwhile most of western Europe, led by France and Germany and backed by Hungary, Slovenia and others, were more cautious of further hurting ties with Moscow. 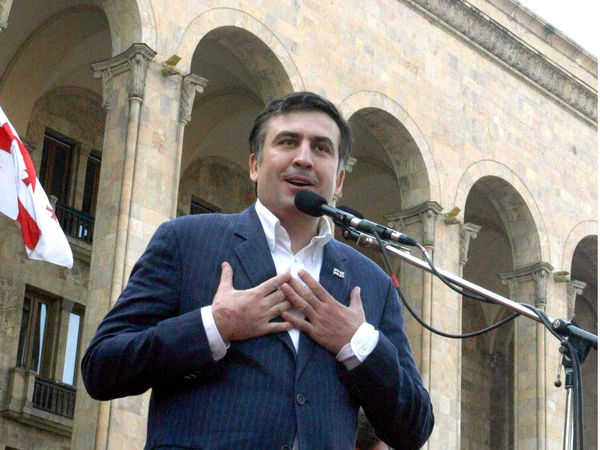