A special service to mark the 10th anniversary of the Omagh bombing has been held in the Co Tyrone town this afternoon.

RTÉ.ie Extra: Click here to watch how RTÉ News reported the attack in 1998 and view a timeline of events leading up to the bombing.

The Real IRA bomb attack killed 29 people including a woman pregnant with twins.

Relatives of many of the victims were joined by community representatives and dignitaries, including the Taoiseach.

However, plans for unveiling a glass monument at the site of the bomb and a new memorial garden nearby proved controversial.

Members of the Omagh support group did not attend this afternoon's ceremony, organised by the district council, as they were unhappy with the way it handled the replacement of their previous memorial.

That memorial carried an inscription stating the victims were ‘murdered by a dissident republican terrorist car bomb’.

The wording has been incorporated in part of the new memorial garden.

This afternoon's service included a minute's silence and an address by former Beirut hostage Terry Waite.

PSNI Chief Constable Sir Hugh Orde insists he is frustrated that no one has been convicted of the bombing.

Mr Orde said it was unlikely that anyone would ever be convicted of the atrocity unless new evidence comes to light.

In a statement, the Taoiseach said the bombing was an attack on all the people of Ireland and that as it continued to build a peaceful and better future, it remained an indelible stain on its history.

A Mass was held at Dublin's Pro Cathedral this morning to remember the victims of the Omagh bombing.

Around 800 people attended the service, including the Lord Mayor of Dublin, Councillor Eibhlin Byrne.

During the service, two ten year-old children read out the names of each of the bomb victims.

Many messages of support have been received by Omagh District Council in advance of the ceremony from Heads of State.

Both President Mary McAleese and the Spanish Prime Minister José Luis Rodriguez Zapatero have sent messages on the anniversary.

President McAleese said that far from fragmenting, the people of Omagh ‘embraced each other as family, as friends, as one suffering community’.

She added that a decade later ‘the people of Omagh can take rightful pride in the remarkable contribution they made to the consolidation of an historic peace that is surely growing and deepening by the day’.

Prime Minister Zapatero said that, while the aim of the attack on Omagh was to prevent the peace process, the evidence of its failure to do so is the fact that historic steps have been taken which are having a positive impact on reconciliation and prosperity in Northern Ireland. 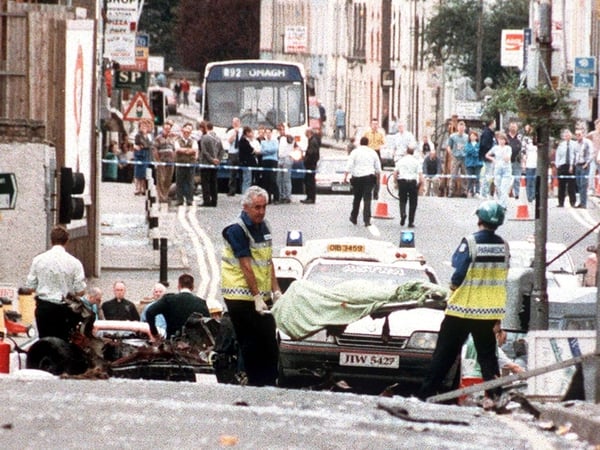