Labour Party Leader Eamon Gilmore has declined an invitation to participate in a round-table meeting with French president Nicolas Sarkozy on the Lisbon Treaty.

Mr Gilmore said: 'The format of the proposed meeting was pointless.

'It is unclear what, if anything, such a meeting could actually achieve. The time allowed would not permit any real engagement on the issues.

'This kind of idea that President Sarkozy can come to Ireland and persuade us to change our mind or try and hear what we have to say and give us all three minutes each, I think there is a little degree of arrogance in that.

'In all probability such a meeting would probably become a re-enactment of the Lisbon debate. That debate is over and the referendum has delivered a result.'

Other representatives from the Yes and No Lisbon Treaty campaigns will meet Mr Sarkozy at the French Embassy in Dublin on Monday.

President Sarkozy, who currently chairs the rotating EU presidency and is due in Dublin on Monday, said this week the Irish will have to re-vote on the issue.

Richard Boyd-Barrett of the People Before Profit Alliance and Patricia McKenna of the Green Party and the People's Movement have received invitations.

Sinn Féin's Mary Lou McDonald has been invited too, but may not get back on time for the meeting because she is on holiday. If that is the case, Sinn Féin president Gerry Adams would meet President Sarkozy instead.

The guest list, which is still being finalised, is also expected to include TD Finian McGrath, Prof Brigid Laffin from the Alliance for Europe, IFA President Padraig Walshe and representatives from IBEC and ICTU.

Libertas Chairman Declan Ganley has said he has accepted an invitation to meet President Sarkozy.

However, Roger Cole from the Peace and Neutrality Alliance says he has not been invited.

The format of the meeting will see each person make a three-minute presentation to Mr Sarkozy.

The Department of Foreign Affairs said that the leader of Fine Gael Enda Kenny will most likely meet the president at a separate meeting, but it has not been confirmed if this will take place at the embassy or in Government Buildings.

Taoiseach Brian Cowen has said that he hopes for a good discussion with the French President next Monday.

The Taoiseach, who was concluding a visit to New York, said their talks would centre on determining how this country can proceed in a way that respects the outcome of the Lisbon Referendum without bringing the EU reform process to an end.

Mr Cowen said the problem was not an easy one to solve but that he intended to proceed in a patient and serious way.

Asked about the comments by the head of the European Central Bank, in which Jean-Claude Trichet has said he would not alter policy to aid countries experiencing economic difficulty, Mr Cowen said that while volatile exchange rate movements did not encourage stability he respected the independence of the ECB.

Meanwhile, Ireland must decide by October what to do about its rejection of the Lisbon Treaty, according to the EU Commissioner for External Relations.

The EU was thrown into crisis in June after a No vote was passed in the referendum on the controversial treaty.

Questioned at a news conference, Commissioner Benita Ferrero-Waldner said Ireland should be allowed to analyse and reflect in order to tell us what they must do at the EU's next summit in October. 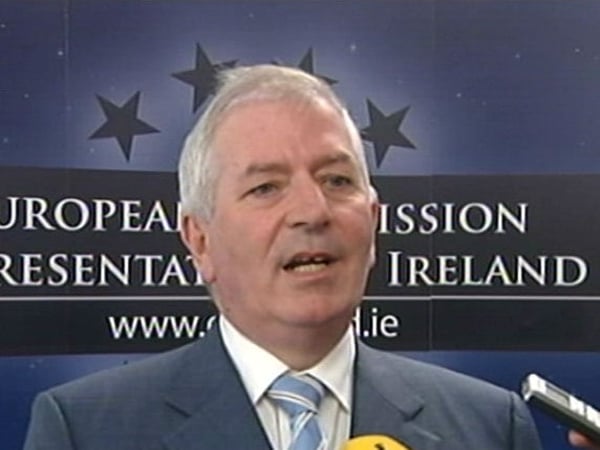