For complete coverage of the Lisbon Treaty referendum, see RTÉ.ie/lisbon.

Taoiseach Brian Cowen has said there will be sufficient, independently verified information about the Lisbon Treaty available to all the electorate to enable them to make a choice on 12 June.

Speaking on RTÉ Radio's News At One, Mr Cowen said he had not read the treaty cover to cover, but argued it was not an impenetrable document.

He said there was information available on what the treaty means and that people needed to know was what was being asked of them.

He said that voters were being asked to make the EU a more effective and efficient decision-making process.

The Taoiseach said there was nothing in the Lisbon Treaty that would lead to a change in Ireland's rate of corporation tax, adding that Ireland is a sovereign state in relation to tax levels.

He also said the best guarantee to help farming policies in Ireland is for farmers to vote Yes.

Meanwhile, Sinn Féin has accused two Government ministers of being unaware of key aspects of the Lisbon Treaty.

The party's Dublin MEP, Mary Lou McDonald, says former Enterprise Minister Micheál Martin has denied that Ireland will lose its veto over the outcome of the International Trade Agreement.

The MEP also says that the Defence Minister, Willie O'Dea, appears unaware that Ireland will be unable to block other EU states coming together to form mini military alliances.

Ms McDonald has said ministers should 'brush up' on the detail of the treaty document before continuing to pursue a Yes vote and slogan-driven campaign.

The MEP has also asked the Taoiseach to explain why he thinks the treaty is good for Ireland.

Earlier today, 12 June was officially appointed as the polling day for the referendum by Environment Minister John Gormley.

Polling will take place between 7am and 10pm on that date, which is a Thursday.

The minister has appointed Maurice Coughlan, a Principal Officer in the Department of the Environment, Heritage and Local Government, to be the referendum returning officer.

Every Irish citizen who is included in the 2008/2009 register of electors is entitled to vote at the referendum. The total electorate currently stands at 3,051,278.

Those not on the register may be eligible to apply for inclusion on the supplement to the register. To be eligible, a person must be a citizen of Ireland, must be 18 years of age by polling day and must be ordinarily resident in the State.

An application for entry on the supplement can be obtained from city/county councils or downloaded at
www.checktheregister.ie.

Any applications must be made by 24 May.

At the launch, Mr Cowen said he was confident all members of Government would be supporting a Yes vote.

He said all members of the Fianna Fáil party and parliamentary party, let alone the Cabinet, were fully supportive of the treaty.

He said the treaty was fundamental to what Fianna Fáil believes, how it thinks and where it was going as a party.

Mr Cowen said anyone who had a conscientious problem with the treaty would have to consider that issue outside the context of the parliamentary party.

Launching the Labour party's Yes campaign yesterday, Eamon Gilmore said the treaty would strengthen individual rights and those of Irish citizens at home.

He said the treaty provided for greater openness and accountability to European decision-making.

Meanwhile the Socialist Party is starting the final phase of its No campaign.

Over the weekend, an opinion poll showed a ten-point lead for the Yes side in the upcoming referendum.

But with the poll date a month away, more than a third of voters are still undecided.

Responding to the Red C poll in the Sunday Business Post, Sinn Féin said the No campaign is not a lost cause. 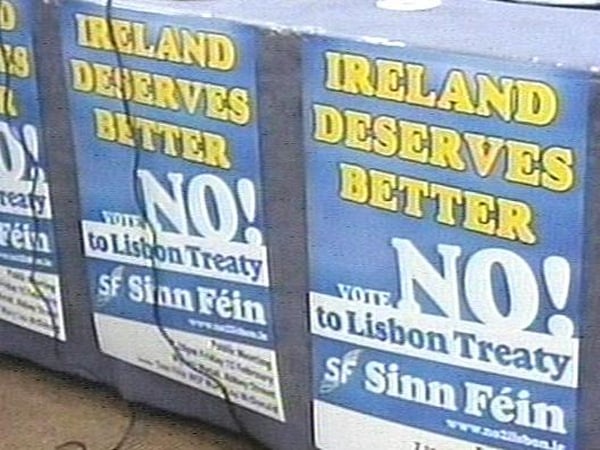