US Democrat Hillary Clinton has admitted being wrong in her claim that a hail of sniper fire ambushed her arrival on a 1990s trip to Bosnia.

Following up clarifications by her aides, the presidential contender dismissed her faulty recollection as a ‘minor blip’ that did not undermine her boasts of superior foreign-policy experience over her rival Barack Obama.

‘So I misspoke - I didn't say that in my book (Living History) or other times but if I said something that made it seem as though there was actual fire, that's not what I was told,’ she told the Philadelphia Daily News.

‘I was told we had to land a certain way, we had to have our bulletproof stuff on because of the threat of sniper fire,’ she said.

The Obama campaign has jumped on the controversy to buttress its claim that the New York senator dishonestly exaggerates her CV to argue that she is ready to be commander-in-chief.

Television footage from the 1996 trip, on which Mrs Clinton was joined by her daughter Chelsea, singer Sheryl Crow and comedian Sinbad, contradicted her own claims to have scurried across the tarmac at Tuzla airbase under gunfire.

The reports showed Mrs Clinton's party being greeted by smiling officials on the tarmac at Tuzla as it disembarked from a US military plane, and listening as an eight-year-old Bosnian girl read a poem.

‘I remember landing under sniper fire. There was supposed to be some kind of a greeting ceremony at the airport, but instead we just ran with our heads down to get into the vehicles to get to our base,’ Mrs Clinton said last week.

Obama's camp said late yesterday that a slip of the tongue was improbable since those remarks were not spontaneous.

‘When you make a false claim that's in your prepared remarks, it's not misspeaking, it's misleading,' Obama campaign spokesman Tommy Vietor said.

‘It's part of a troubling pattern of Senator Clinton inflating her foreign policy experience.’

Mrs Clinton, interviewed by the Philadelphia newspaper's editorial board ahead of the Pennsylvania primary on 22 April, denied that the row might undermine her national security credentials. 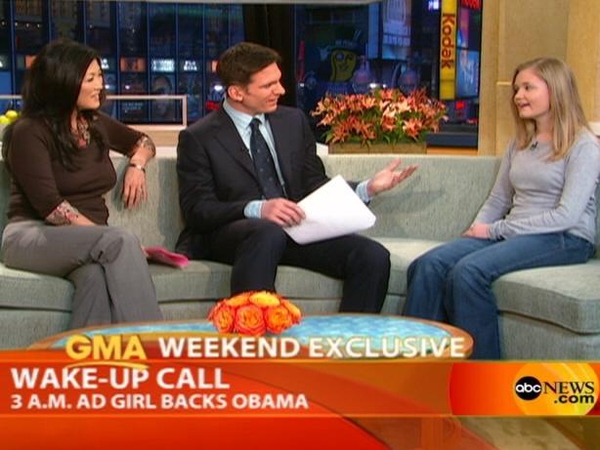