Colombian rebel leader Raul Reyes is reported to have been trying to arrange a meeting with French President Nicolas Sarkozy at the time he was killed in an Ecuadorean jungle camp last Saturday.

President Uribe earlier said he would seek to have his Venezuelan counterpart, Hugo Chavez, brought before the International Criminal Court for allegedly financing the Revolutionary Armed Forces of Colombia (FARC).

The announcement by Mr Uribe has deepened the crisis triggered by Colombia's weekend raid inside Ecuador to kill the FARC leader.

Mr Uribe said he had ordered his envoy at the UN to ask the ICC to try Hugo Chavez for sponsorship and financing of genocide.

He said the seized documents would be presented to the Organization of American States, which was to meet on the crisis later today, and to the UN.

Venezuela has strongly denied the accusation.

Caracas has closed its border with Colombia, even as diplomatic talks to avert conflict were about to begin.

Ecuador President Rafael Correa is to start a five-nation tour of the region to lobby for support against what he calls a premeditated violation of sovereignty.

Latin American governments have generally lined up to condemn Mr Uribe for sending troops and warplanes over the border.

Nicaraguan President Daniel Ortega, a former militant and a close leftist ally of Venezuela and Ecuador, accused Mr Uribe of becoming a threat to Latin America.

Venezuelan President Hugo Chavez, who has negotiated the release this year of rebel hostages, called the guerrilla leader's death a cowardly assassination by a US-backed president who did not want more captives freed.

Despite the three leaders' brinkmanship and the risk of military missteps, political analysts said a conflict was unlikely on borders that stretch from parched desert through Andean mountains and jungles to the Pacific Ocean. 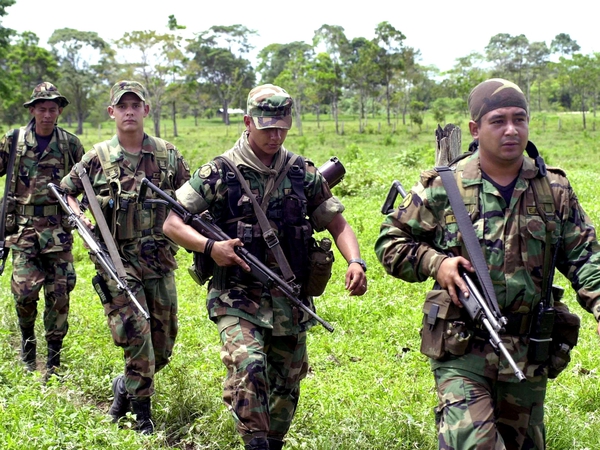