Sinn Féin President Gerry Adams has accused the Government of failing to stand up for the national interest in negotiations for the Lisbon Treaty, claiming that Dustin the Turkey could have done a better job.

In his address to the party's Ard Fheis in Dublin, Mr Adams called for the transfer of policing and justice powers to the Northern Executive.

He also announced the establishment of a Sinn Féin task force to set out a roadmap to Irish unity.

Earlier the Ard Fheis supported the leadership's policy on taxation.

The vote follows an impassioned debate, which saw one of the party's TDs, Aengus Ó Snodaigh, opposing the leadership position.

But the presentation of that policy can cause problems, especially as many of the rank-and-file felt the leadership did a u-turn on tax during the general election campaign.

That claim was rejected by the party's Dáil leader, Caoimghin Ó Caoláin, who urged delegates to support a motion from the leadership setting out the party's policy on taxation and on redistributing wealth.

But his colleague in the Dáil, Aengus Ó Snodaigh, claimed the motion did not go far enough. He said Ireland has one of the most inequitable tax systems in the EU, but that Sinn Féin did not have a credible tax policy.

They also passed three motions on workers' rights, including a call on the Government to stop supporting the exploitation of temporary agency workers.

Arthur Morgan said the issues around agency workers affected both migrant and Irish workers who were being displaced and forced to join agencies particularly in the construction sector.

Gerry Adams earlier said that DUP senior members who support power-sharing need to assert themselves as Ian Paisley nears the end of his term as leader.

Speaking outside his Ard Fheis in Dublinm Mr Adams said those members of Dr Paisley's party who wanted him to go were against power-sharing and those who support the devolved government needed to assert themselves.

While the leadership change was a matter for the DUP, Mr Adams warned that how it was handled would determine the future of unionism and the future of power-sharing itself.

Sinn Féin Justice spokesman Aengus Ó Snodaigh has described the killing of two young Polish men in Drimnagh as a tragic blow to their families, to the community in Drimnagh and to Irish society itself.

He said their deaths were a stark reminder of the dangerous rise in drug and alcohol-related disorder.

Delegates are being asked to support a motion calling on the Governments North and South of the border to discuss the setting up of an all-Ireland Garda, PSNI and Customs team to combat the importation of drugs into the country.

The party's leader in the Dáil, Caoimhghín Ó Caoláin, criticised her handling of the pharmacists dispute, and claimed she was the ‘wrecking ball’ of the health service.

Mr Ó Caoláin accused Ms Harney of implementing a series of ‘savings’ which have led to a recruitment ban, and reductions and removal of hospital services.

Delegates also backed a call for a full independent investigation into the deaths of two firemen in Bray last September. 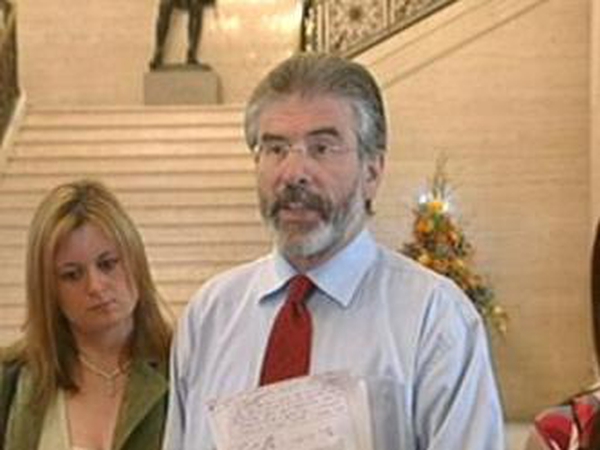