Senior Fianna Fáil sources have dismissed any suggestion that the Tánaiste's support for the Taoiseach in the Dáil today was in any way 'half-hearted'.

Fine Gael leader Enda Kenny claimed Brian Cowen's defence of the Taoiseach was 'half-hearted and pathetic' - but Fianna Fáil say it stands behind Mr Ahern in the giving of his evidence to the tribunal.

With Bertie Ahern away on a brief tour of three European capitals, the Tánaiste was in the firing line in the Dáil for a well-flagged Opposition attack on his support for the Taoiseach's evidence at the Mahon Tribunal.

Enda Kenny told Mr Cowen his hour had come to remove the paralysis caused by the Taoiseach's evidence from the Government.

Eamon Gilmore said only he could give decisive leadership by seeking Mr Ahern's resignation.

In reply, Mr Cowen said the Taoiseach retains the confidence of the Dáil and of Fianna Fáil, and that while he holds that confidence he will continue to lead the party.

Some, including Mr Kenny, calimed this defence was half-hearted - this evening Fianna Fáil sources dismissed this, saying the Taoiseach had given his evidence to the Tribunal, and the party stands behind him in the giving of that evidence.

Earlier in the Dáil, Mr Kenny said what was happening in the Ahern era was akin to what happened in the Haughey era - he said the sins of the master were being replicated by the pupil.

Mr Kenny said it was time for the Tánaiste to deal with the matter with a sense of leadership and courage rather than collusion and weakness.

He said you could buy one of his stories, but to buy them all was just unbelievable.

Mr Gilmore said we were now in a position where there was no public confidence in this Taoiseach.

Mr Cowen said the Taoiseach is adamant that he did not receive one cent from property developer Owen O'Callaghan, and that is the Taoiseach's position.

He accused the Opposition, particularly Fine Gael, of trying to pre-empt and pre-judge the evidence for political tactics. 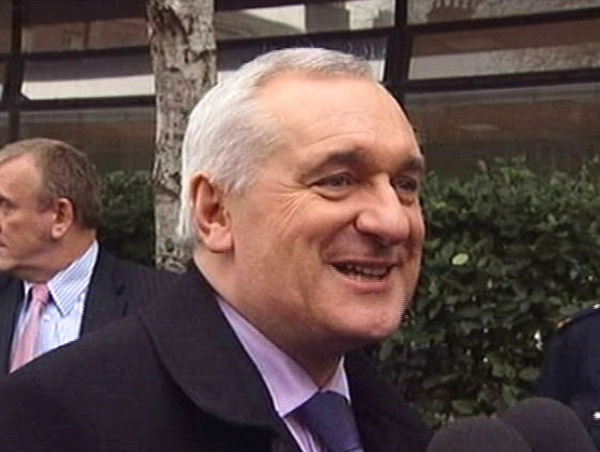