Flooding following heavy rain is continuing to cause problems in the south and east of the country.

Cork and Kilkenny are the worst affected.

In Fermoy, Ashe Quay is closed to traffic, and gardaí say water levels are rising. There is a danger of the Blackwater bursting its banks when the tide comes in.

Floods are receding in Mallow town, however some roads are still impassable, including Bridge St and Park Rd. The Spa Rd is closed to inbound traffic but is accessible outbound. Part of the Ballyclaw Rd has collapsed by the Longvilla House Hotel but motorists can get by.

However, a high tide is expected at about 7pm, so flooding may increase again.

In Blarney, Shoreknock Line is impassable.

In Cork City, the Lee Rd and Healy's Bridge are closed. The Carrigrohane Straight Rd has not flooded but may do later. Diversions are in place.

In Waterford, the Tramore Rd is closed due to flooding. Diversions are in place via Avondale and the Old Tramore road.

There has also been flooding on the N80 between Stradbally & Carlow and on the R435 out of Rathdowney.

Flooding on the Woodenbridge to Aughrim Rd has subsided.

There is flooding on the N62 between Templemore and Roscrea, in Co Tipperary.

In Co Kilkenny, the Quay on the New Ross Rd (R700) into Thomastown is closed due to floods. And Islands Road in Urlingford is closed until further notice due to a partial bridge collapse.

Centaur St and Black Bog Rd in Carlow town were flooded and impassable.

Elsewhere, Co Wicklow was also badly affected, with the Mill Road in Greystones impassable because of flooding. One lane of the N11 northbound is also blocked at Kilpedder due to a mudslide.

Meanwhile, 8,500 Eircom customers remain without a phone service after the recent stormy weather. Areas still without phone lines include the northwest, southwest, Connacht and the Carlow, Kilkenny and Tipperary regions.

Eircom crews continue to work to restore lines but it will be middle of next week before full service restored.

However, the ESB says the majority of the 20,000 households in the northwest left in the dark yesterday because of bad weatherhave had power restored. 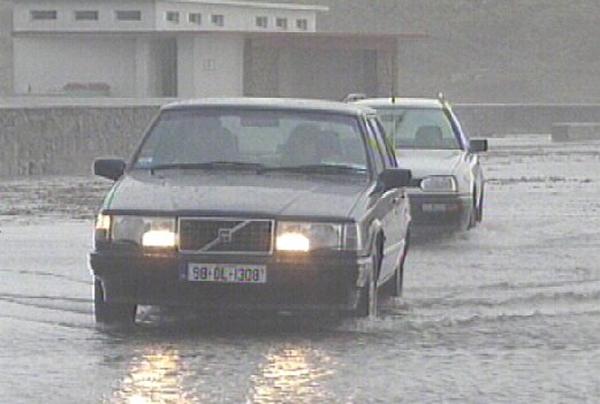