Turnout was high in the Polish parliamentary elections but voters are being left waiting for indications of a result.

Exit polls were delayed because of technical difficulties at some polling stations.

Poles voted heavily in an election that could weaken the grip of the conservative Kaczynski twins, Lech and Jaroslaw, and bring in a government ready to speed up economic reforms and improve relations with EU allies.

Turnout, at over 55%, was the highest since Poland voted to end communism in 1989.

The high level of participation was expected to benefit the Civic Platform, a centre-right opposition party that had an opinion poll lead.

The electoral commission said ballot papers had run out in some areas and voting was extended until 8.55 pm Irish time.

It had originally been due to end at 8 pm.

Exit polls were due after polling stations closed.

Prime Minister Jaroslaw Kaczynski did not appear very optimistic as he voted.

'We have to accept the will of the voters, that's obvious. We won't get angry at the people and lessons from this campaign will be learned,' he said.

Platform leader Donald Tusk, tipped to be the next prime minister if his party wins, sounded more upbeat.

'Of course I expect to win, but I also know perfectly well that it will not be easy and the battle goes on until the last minute,' he said.

Some 22,000 Poles living in Ireland voted at special centres set up around the country.

They cast their votes at the Polish Embassy in Dublin, Mary Street in Cork and at the Irish-Polish Cultural Association in Limerick since early morning.

In the run-up to the election, there was heavy campaigning for the expatriate vote.

After leaving an economy that could not provide them with jobs to match their qualifications, the many young immigrants in Ireland and in Britain could make quite an impact on Poland's future political direction.

The main opposition party Civic Platform and government ministers have openly targeted them for votes.

Opposition leader Donald Tusk has promised a repeat of Ireland's economic success in Poland, and ministers have visited Dublin to sell their plans if re-elected.

The snap election was called two years ahead of schedule, after the Law and Justice Party fell out with its junior coalition partners.

Neither The League of Polish Families nor Self Defence are expected to do well.

But it is an eagerly awaited election also and the first time people born after the collapse of communism will be voting.

Civic Platform says it is looking to the future, will introduce economic reforms, and will reverse the anti-EU policies of their opponents.

Law and Justice voters tend to be older, and from deeply conservative rural constituencies.

While Civic Plarform appeals to younger voters from cities and the western part of Poland.

Turnout was sluggish early today as voters in the overwhelmingly Roman Catholic country headed to the polls after Sunday Mass. 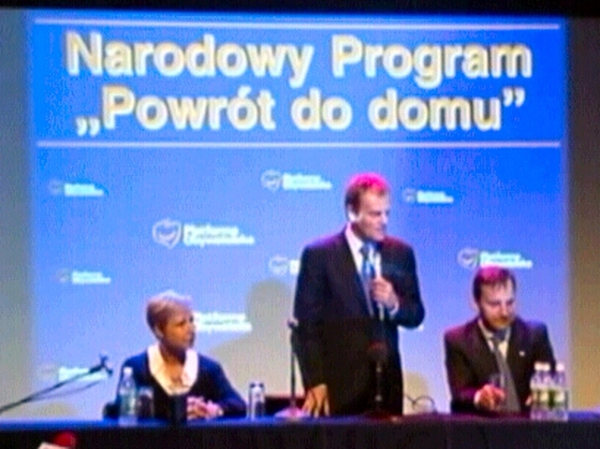