At least nine people have been killed during further protests in the Burmese capital Rangoon.

Over 50,000 people, many of them youths and students, joined monks in the centre of the city today and repeatedly defied orders to disperse.

In six hours of protests, state media reported that nine people were killed and another 11 injured, saying only that security forces had 'fired warning shots'. The actions of the Burmese government have been described as 'outrageous' by the US.

Among those killed was a Japanese journalist, who became the first foreign victim of the violence.

The deaths come amid an increasing international outcry and follow two weeks of demonstrations, which began in Rangoon on 19 August after a massive hike in fuel prices.

The protests have grown into the most serious challenge to the regime in 20 years. In 1988 at least 3,000 people died when the military regime crushed a pro-democracy uprising.

Meanwhile, British diplomatic sources have said there is evidence that many monks were badly beaten following overnight raids on monasteries around Rangoon.

At least three such raids occurred in the east of the city, which each triggered clashes as hundreds of supporters tried to prevent monks from being hauled away by authorities in an apparent bid to prevent them from leading the protests.

It is reported that at least 200 monks were taken away in army trucks overnight.

At least four people were killed, 100 injured, and 300 arrested during protests yesterday.

Troops and police, along with water cannons, have been stationed at points around the Sule Pagoda in Rangoon and a curfew remains in effect. The pagoda has been the focal-point of the huge protests over recent days.

Yesterday, The UN Security Council urged the regime to meet a UN envoy, and both the European Union and US said they were 'deeply troubled' by the response to the protests.

And although China called on Burmese rulers to show 'restraint' in handling protests, it did not condemn the crackdown.

China, eager to avoid having its friendship with Burma tarnish its own image ahead of next year's Beijing Olympics, had previously only called for 'stability' to be maintained. 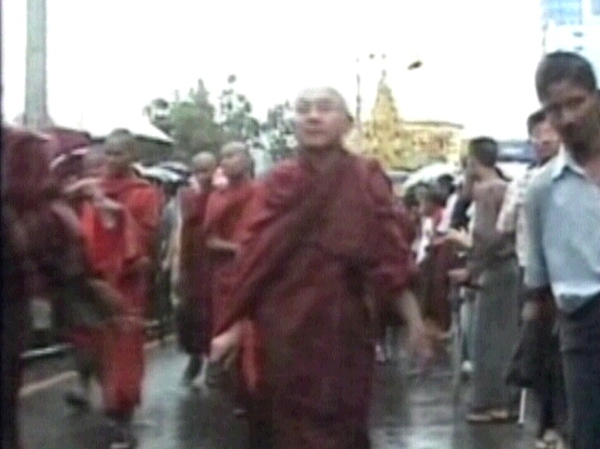