It has emerged that US officials had warned as early as 1990 that the bridge that collapsed over the Mississippi River had serious structural problems.

Five people have died and at least eight others are still missing after the collapse of the bridge in Minneapolis during rush-hour traffic on Wednesday evening.

At least 79 people were taken to hospital after the 20m steel-arch bridge buckled, leaving some 50 vehicles submerged in the Mississippi River.

The problems with the Interstate 35 bridge in the 1990s were apparently so severe that state officials considered bolting steel plates to its supports to prevent cracking in fatigued metal, according to newspaper reports.

They decided against doing that out of fear that the bolts would weaken the bridge and a fresh inspection was delayed by unrelated repairs to the driving surface.

The collapse on Wednesday has renewed calls for a major overhaul of ageing US infrastructure, with experts saying billions need to be spent to bring standards up.

Two years ago, the American Society of Civil Engineers warned that more than 27% of the almost 600,000 bridges in the US were rated as structurally deficient or functionally obsolete.

US President George W Bush plans to visit the site of the accident tomorrow. 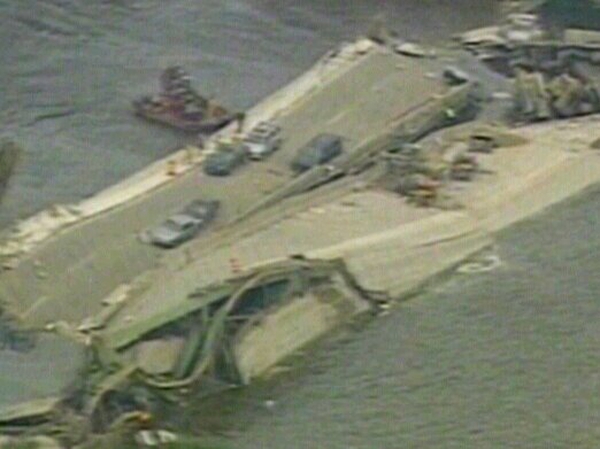 Four dead in US bridge collapse