Devolved government in Northern Ireland has resumed at Stormont for the first time since the power-sharing assembly was suspended in October 2002.

The Taoiseach, Bertie Ahern, and the British Prime Minister, Tony Blair, were among the guests in the visitors' gallery.

They witnessed the DUP leader, Ian Paisley, and Sinn Féin's Martin McGuinness take their pledge of office as First Minister and Deputy First Minister in a power-sharing administration.

Ten ministers of the power-sharing executive were then appointed.

Formal proceedings at the event were delayed by 30 minutes as a mark of respect to the late DUP MLA, George Dawson, who died last night after a short illness.

Both Mr Paisley and Mr McGuinness paid tribute to the East Antrim assembly member as they arrived at Stormont earlier this morning.

Mr McGuinness said today was not hype but history and represented the most important leap forward for the North in 15 years.

Mr Paisley said this was a sad but special day marking a new beginning on the road to peace and prosperity.

He added that he hoped people would rise to the challenge so that everyone was equal under the law and subject to the law.

President Mary McAleese said it was an iconic day and a wonderful opportunity to create a fair and just society crafted out of such needless, shameless, scandalous pain.

She also said she had no answer to explain why 40 years of pain, sectarianism and conflict was allowed to happen.

Taoiseach Bertie Ahern said it had been a day without hitches and a milestone to get a working executive 'that is totally inclusive and representative of the great traditions of the North'.

US Senator Hilary Clinton praised the Northern peace process and said it had served as a model for diplomacy around the world. She also said it had informed her own vision for US foreign policy.

Sinn Féin President Gerry Adams welcomed 'another significant landmark in the process of transforming life on this island'.

Meanwhile Tony Blair said lessons from the success of the Irish situation can be learned for those involved in conflict.

He said he was proud of what had been done and the relationship now in place between the UK and Ireland.

Mr Blair described Ireland as 'one of the most successful and dynamic countries in Europe' and said that 'if countries like ours stick together, we all will do well'.

He concluded by saying the type of conflict that disfigured these islands was wrong and destructive. 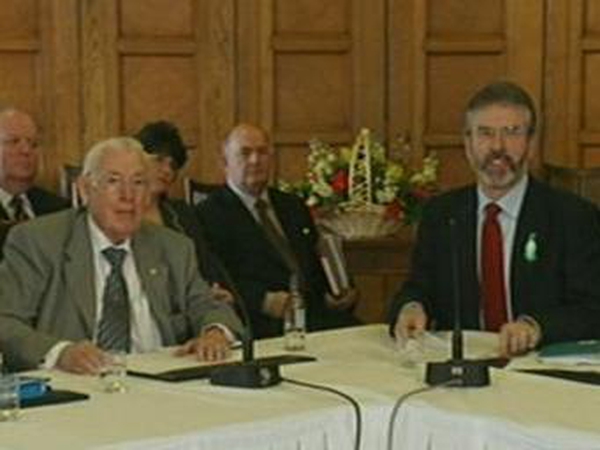